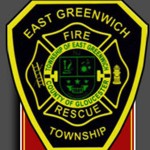 Oct. 4 at 17:33, 352 Concetta Drive for a Dwelling Fire. The caller was reporting a grill on fire on the rear deck extending to the patio furniture. Chief Gould (1901) arrived and found a small grease fire on the deck, the fire was out. He ordered the assignment held to District 19. Also dispatched were Harrison, Woolwich, Gibbstown and GC EMS. The district was in service for 19 minutes.

Oct. 7 at 13:55, 335 Carriage Drive for a Carbon Monoxide Alarm. The caller reported the alarm sounding but they were not feeling any ill effects. Rescue 1918’s crew arrived to investigate. They discovered a faulty detector and advised the homeowner to replace. The crew was in service for 20 minutes.

Oct. 7 at 21:17, 2301 Royal Crescent Court for a Dwelling Fire. A resident reported smoke in the building hallway. They were advised to evacuate. Crews arrived to investigate and found careless cooking to be the cause. They used fans to help clear the smoke. Also dispatched were Harrison, Woolwich, Gibbstown and GC EMS. The station was in service for 12 minutes.

Oct. 10 at 21:12, 558 Hereford Lane for a Service Assignment. The caller reported two of his cats had gotten out on the roof and were stuck in the gutter. Ladder 1916 arrived and set up ladders to get to the felines. One cat had already freed itself and crews assisted the other in getting unstuck from the gutter. Both kittens were turned over to the owner. The ladder was in service for 22 minutes.

Oct. 12 at 07:34, 18 Whiskey Mill Road for Wires Down or Arcing. A resident out for a jog discovered branch down on a wire arcing and starting to catch fire. District 19 was in the station preparing their Fire Prevention presentation for the Samuel Mickle School. Rescue 1918 and Chief Gould (1901) responded and confirmed the branch causing the problem. AC Electric was notified but had a 90 minute ETA. 1901 released Rescue 1918 to head over to the school. He stood by until the branch fell clear and was no longer causing a safety problem. The station was in service for 74 minutes.

Oct. 12 at 10:51, 18 Whiskey Mill Road for Wires Down or Arcing. A second branch fell on the wires at the same location, causing the same problem. 1901 responded to confirm the problem. Again AC Electric was notified and advised of another long ETA. A safety barrier was set up and the scene as turned over to EGPD. 1901 was in service for 29 minutes.

Oct. 14 at 12:12, Kings Highway at Hazel Court for a Vehicle Fire. Multiple callers were reporting a VW Bug on fire. Rescue 1918 arrived and confirmed a vehicle fully involved and went into service with a hose line. Engine 1911 responded to assist 1918. The fire was extinguished and the County Fire Marshal’s office was called in to investigate. Rescue 1918 and Engine 1911 were in service for 48 minutes.

Oct. 24 at 23:05, 2202 Royal Crescent Court for a Dwelling Fire. The caller was reporting the fire alarm sounding and smoke in the hallway. Chief Gould (1901) arrived to a heavy smoke condition in the building hallway. The cause was determined to be careless cooking. 1901 held the assignment to Ladder 1916 and Rescue 1918. Crews assisted clearing the smoke using fans. 1901 requested the County Fire Marshal’s office to investigate. Also dispatched were Harrison, Woolwich, Gibbstown and GC EMS.  The district was in service for 80 minutes.

This time of year, East Greenwich Twp. Fire and Rescue remind residents to change the batteries in their smoke and Carbon Monoxide alarms. If they are over 10 years old or past their expiration date, the alarms should be replaced. Fire Safety is everyone’s responsibility!

East Greenwich Twp. Fire and Rescue is a 100 percent volunteer emergency response department protecting East Greenwich and its surrounding communities. Anyone interested in joining the department please e-mail recruitment@district19.org, call 856-423-6916 or stop by the station at 5 W Cohawkin Rd on Tuesday nights at 7:00pm