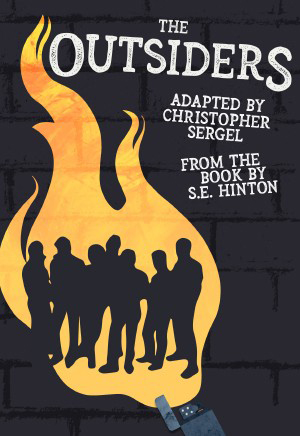 Adapted for the stage by Christopher Sergel, OUTSIDERS opens Dec. 6 with performances on Dec 8 & 9. Evening performances begin 6:30 p.m. with the Saturday matinee at 2 p.m.

The main character, Ponyboy Curtis, played by sophomore Michael Alberta, recounts the defining events of his life as a Greaser, a derogatory term for disadvantaged youth in 1964 Oklahoma. Throughout the story, an inseparable gang of greasers navigate their way through class conflict, violence, rejection, and death, in a search of hope, reconciliation, redemption, understanding, acceptance, and love.

In the novel, the greaser gang is all male, but Kingsway director, Andrew Young, took a different approach in casting of The Outsiders. Some of the roles, traditionally male, have been re-imagined and cast with female counterparts. Mr. Young believed that such an important story should be adapted to fit a modern audience.

“I wanted to give deserving drama students a chance to grow as actors in challenging roles,” recalled Mr. Young. “But when I mentioned I was considering Outsiders for this year’s play, the response of the drama kids was so overwhelmingly enthusiastic I just knew we had to produce it because of their (the students) emotional connection to the novel.”

Junior Erin Highland, cast as Dallas “Dally” Winston, believes that “the core themes of this play have no gender bias, and will deeply resonate with anyone who watches it. I appreciate Mr. Young recognizing how relevant this story is to young women, as well as young men.”

The Company of The Outsiders fully recognize how important it is to tell this story in today’s society. Senior, Lydia Riddell, cast as Johnny Cade, stated, “Kingsway doing a play as influential as The Outsiders is really inspiring because so many kids and adults can relate to the social issues. This production will have a positive impact on everyone who sees it.”

Audiences are advised that scenes of mild violence will be depicted on the stage. To ensure student safety and to be true to the themes of The Outsiders, these scenes were choreographed by professional stage combat instructors, Jacqueline Holloway and Millie Omps.