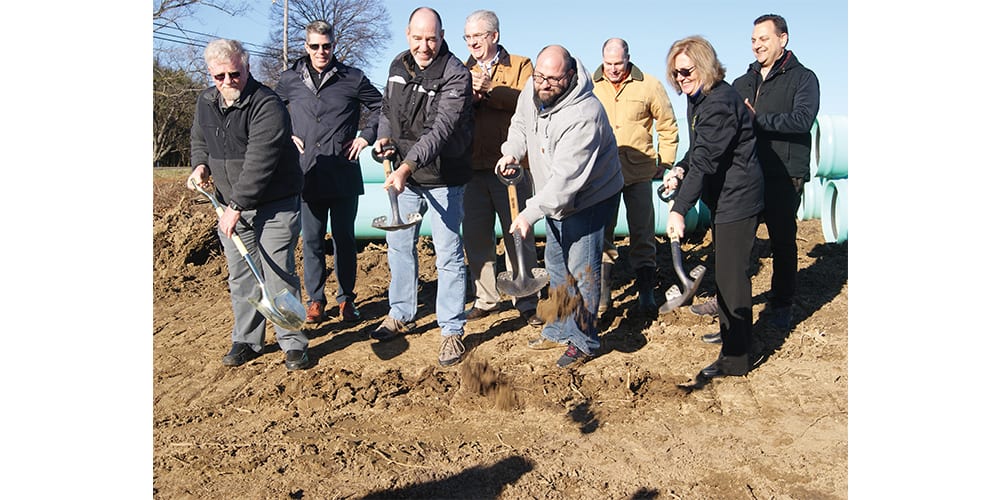 WOOLWICH TWP. – Groundbreaking ceremonies were held at the corner of Garwin Road and Route 322 on Dec. 18 for the start of the long-awaited installation of sewer lines along Route 322 in Woolwich Township.

Although this ceremony was to mark the beginning of the installation of the 7.5-mile sewer collection and conveyance system by South State, Inc., water lines will be installed by Aqua-New Jersey at the same time. This work is also scheduled to coincide with the New Jersey Department of Transportation funded overhaul of the intersection of Kings Highway and Route 322.

Construction of the sewer system is expected to take just over a year to complete. The sewer system will begin a short distance from New Jersey Turnpike Exit 2 and flow along Route 322 to the wastewater treatment plant in Logan Township, which is completing an expansion to its facility to receive the increased capacity.

Property owners with septic systems along the new sewer line will be required to connect to the new system, according to township ordinances. No time frame, other than “promptly”, is listed in the ordinance.

Developers have been waiting for water and sewer services to be available on this section of Route 322. With the installation of water and sewer, the township is hoping developers will now be earnestly interested in developing around the turnpike exit, which is the only undeveloped interchange in the state.

The township’s conceptual plan for the Route 322 Corridor is called Kings Landing at Woolwich Township. This includes 1,576 acres extending from the turnpike exit along more than three miles of Route 322 to within a mile of Route 295 and three miles off the Commodore Barry Bridge.

A developer, Wolfson Group, has already received local approvals for Phase One/Woolwich Commons to be located next to Exit 2 on the turnpike. This phase has a 545,000 square foot retail plaza. His total project would include 1.5 million square feet of retail space.

“With the advent of public water and sewer,” commented then Woolwich Township Mayor Jordan Schlump, “the last obstacle to a major new commercial, mixed use town center is being tackled. With these utilities in place, the many conveniences and jobs that resident have been promised for so long can finally come to fruition.”

The township noted that with each new development along the 322 Corridor, significant transportation improvements will be undertaken on the state highway, resulting in additional lanes to manage both existing problems and future traffic.

According to the township, the sewer project was able to proceed when officials were notified in November that their 30-year, low interest loan needed to finance the project from the New Jersey Infrastructure Bank, was deemed complete.

Township Director of Community Development Matt Blake added, “The project has been a monumental undertaking from the start that has required all the partners to think outside the box, be flexible and work as a team.”