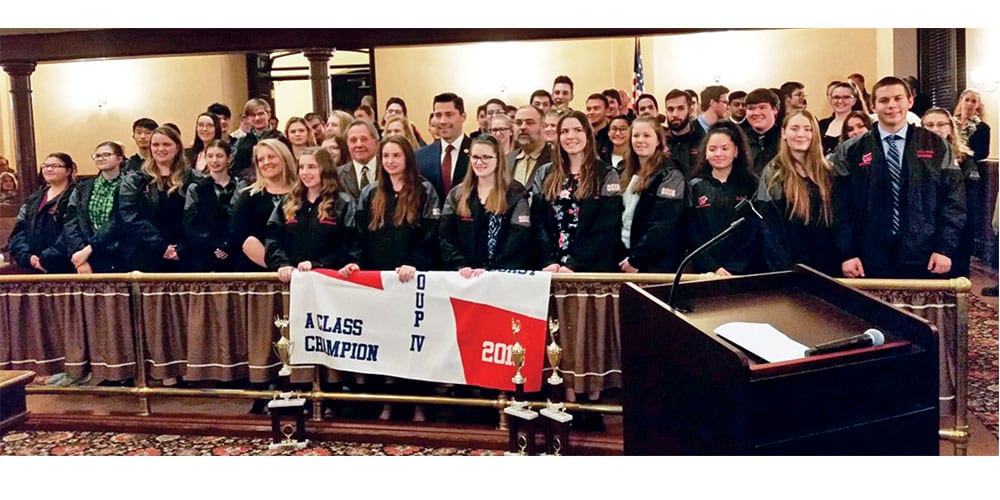 WOOLWICH TWP. — On March 6, students from the Kingsway Regional High School Marching Band were presented with a proclamation and Certificates of Commendation congratulating them on becoming the 2018 Atlantic Coast Champions in the Tournament of Bands Group IV A Class.

The Kingsway Regional High School Marching Band is the largest band in the school’s history, currently made up of 97 members, due to the inclusion of eighth graders. The band’s winning production, “The Bride of Frankenstein,” also won awards for Best Music, Best Percussion and Best Color Guard under the guidance of Band Director Joe Henderson.

Freeholder Director Robert M. Damminger said, “Marching bands and color guards often don’t get the recognition they deserve for the work that they do. These students dedicate a huge amount of time and effort to perfecting every little aspect of their productions and it shows in their performances. The Kingsway Regional High School Marching Band’s success demonstrates how much of themselves these students dedicate to their performances.”

Freeholder Deputy Director Frank J. DiMarco said, “The Kingsway Regional High School Marching Band fought hard to claim first place over four other schools and their drive was what got them the title in the end. Alongside all the victories the band was awarded, senior band member Ryan Hughes was awarded a scholarship at the event, proving just how hard these students work and how successful that makes them.”

Along with their multiple victories, the Kingsway Regional High School Marching Band was also able to claim the season’s high score, a 91.365