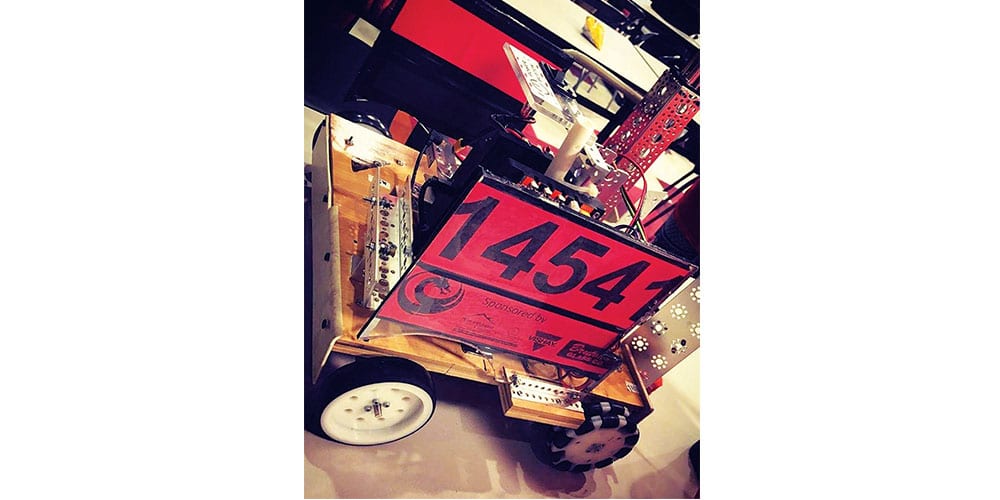 No one was absolutely, for-sure, positive the Little Plywood That Could, would. It was just a baby, after all, less than a year old, newly-minted from the minds and hands of children and let loose to strut its stuff in a major and complex competition for points.

Plywood, a robotic truck conceived and constructed by team Dragonators, a group of local students from grades 7 to 12, won the entire championship robot competition for its age level, held in Dover, DE, Jan 26.

That means the Dragonators will compete with their robot this month at the World competition in Detroit. Some 70 countries will send players seeking the most points in a technology-driven, real-world game that will drive a crowd of about 30,000 to cheering for their favorite team.

Each team will ask its hand-crafted robot player to find, identify, gather and carry gold and silver from an alien planet’s surface and to do it efficiently, safely, timely, all while cooperating with competitors as needed for the sake of being gracious.

This is what they’re teaching our kids these days. At least, the kids who have formed teams under the aegis of a technology-based organization known as FIRST, an acronym meaning: For Inspiration and Recognition of Science and Technology.

Founded in 2005 by two highly tech-involved guys, Dean Kamen, who invented the Segway, and Woodie Flowers, professor emeritus of mechanical engineering at Massachusetts Institute of Technology, FIRST’s goal is to introduce and mentor kids in fun science and technology activities, encouraging them as innovators and participants in STEM (Science, Technology, Engineering, Math).

Mentors with skills in those fields guide programs for elementary school age to high-school seniors. A basic philosophy of the programs is an emphasis on cooperation, team building, and working with others.

In South Jersey, the FIRST program, which has opened clubs in many countries, is a major part of efforts by South Jersey Robotics to bring technology and children together. According to Jennifer Pohlhaus, Secretary to the Board of Directors at SJR, the non-profit ‘s goals settle perfectly with FIRST’s.

“It’s a wonderful organization that is trying to get kids interested in STEM and pursuing STEM-related careers through exposure to robotics programs. SJR supports over a dozen FIRST robotics teams at all levels.”

One of those teams is The Dragonators, which formed last year and competes in the FIRST challenges for its grades 7 to 12 age group. Coach Kindra Liczbinski, a Clarksboro resident, who is Treasury Manager for Vishay Intertechnology in Pennsylvania. She said she discovered SJR and FIRST when she heard other parents talking about it. The teams are beginning to be known in the area.

Also involved as adult mentors with the Dragonators is Kindra’s husband, Raymond Liczbinski, who works in the construction field, and several others with various skill sets. Mentors help team members plan, design, test, build, and operate constructs to meet competition challenges that the FIRST organization sets out each year for the different levels of groups. FIRSTlego, for example, is challenged to build a moveable robot with, yes, you guessed it, Legos.

With mostly middle school and some high school students in the group, the Dragonators were suited to the FTC, the FIRST Tech Challenge. FTC groups were last year challenged to find a way to pick up, carry, and deposit gold and silver minerals from a planet that will not support human life.

The challenge offered points for each milestone, such as a robot moving over a small barrier to get to some minerals. Points were added if the robot could pick up a mineral while hanging from the lander vehicle just above the surface.

As part of the competition, teams were expected to work with and aid competing teams in the “gracious professionalism” portion of the overall challenge. Coach Liczbinski noted, “The best teams are not always the ones with the best robots. We’re competing for most points and the judges count working with competitors if they need help. We might give batteries we can spare to a team who ran out of them,” the Coach said.

“We might ask for advice about a tech problem.” She told of an incident where a competing team’s robot fell over and was too heavy for them to pick up. “We came over with our own robot and used him to help right the other one. We didn’t say anything to the judges, but they noticed.”

One of the Dragonators, Andrew Angelone, was in the driving team that specialized in moving the robot truck, done by remote link to the motor. He wrote a poem-story when the team finally put together a working ‘bot. What they pretty much started with was a piece of plywood. It became the foundation for the truck, which was then rigged with a robot arm.

He called the poem: The Little Plywood That Could

There once was a team. A team of kids.  With not many materials, and lots of antibacterials, they got to work

That’s when they made the little plywood. They could have used redwood, or softwood, or ridgewood, but they knew that all of those were no good.

They worked day and night, but all they could create was a small little bot of just plywood.

They came to the competition, with just one mission. To start a tradition of staying in good condition.

The little plywood was outnumbered by all the other bots. They were made of metals with many more watts. To beat them he knew he had to rev his pedals.

The poor little bot knew he was done. He had thought the other teams did better and that they had won. After all it was his first year.

The story ends where the plywood bot wins the challenge by one point over the metal bots, with the help of an ally team, chosen earlier as part of the competition requirements.

Angelone told the Plywood That Could story to one of the judges, Liczbinski said, to fulfill a rule that competitors must converse with judges, to market their product, as it were. It may well be that judge added the one point that secured the win.

Of interest to Liczbinski and to South Jersey Robotics is encouraging young girls to take a step into STEM areas. “It’s something we will keep trying to do, engage girls in technology,” Liczbinski said.

But right now, the team has only herself, her daughter, Karly, and Natalie Lipieta on the team of a dozen students. Coach Liczbinski does not count as a student and Karly is an honorary member of the Dragonators, not having reached the 12-year-old threshold yet.

That leaves Natalie Lipieta, of Woolwich, the only official girl on the team. She is up to the task and not shy about her interests. Natalie, 12, is in 7th grade at Kingsway Middle School.

“I am interested in STEAM (STEM with the addition of Arts) and I wanted to further my knowledge in that area,” she said. “I started at six, when I was little, and I used to try to build things. I built with Legos but instead of following the directions they gave, I made up my own designs and built them,” she said. “My parents sent me to Space Camp,” Natalie continued, then moved on to when she was nine.

“That’s when I heard about FIRST, on Swedesboro Day, and I wanted to join.” Both SJR and FIRST have community outreach programs designed to introduce families to their programs.

Natalie said she likes best the idea that FIRST offers her more than just knowledge. “I like being a part of something bigger than myself, like science and tech. I want to be a genetic engineer or do something in the medical field.

“And I really like the camaraderie. We’re all pretty close.” Natalie was chosen as the team’s “kid coach”, a team member designated to relate the coach’s instructions to other team members on the competition floor.

Coaches are not allowed to interfere, but the kid coach can move with the team. It allows her to tell the boys what to do. “I like that part,” Natalie said.

Also, at Kingsway Middle is team member Alden Rowlyk of Swedesboro. He’s 13 now but began an interest in STEM at an early age. “I messed around with Legos since I could walk and learned not to eat them,” he recounted.

Alden joined FIRSTlegos at around nine years. He delved into robotics and saw that science and technology would be important to his future. “Science means learning about problems to solve, moving forward,” he said.

He also, like Natalie, likes the camaraderie. “Everyone on the team, we don’t have arguments. We debate, we work around it. I love learning what to do and how to do it, being a team.”

As son of Coach Kindra and Mentor Raymond Liczbinski, Eli, 15, and a student at Kingsway Regional High, found he, too, had a natural interest in STEM learning. “I became interested when I started taking things apart around the house and, most of the time, putting them back together.”

On the more serious side, Eli admitted the science and other knowledge he gets from FIRST is of importance in itself. “It is satisfying curiosity,” he said. “Think about what (Dragonators) just did. It’s magic, you know,” he sing-songed impishly.

Then, all mischief banished, added, “Really. Look what we did with a little strategy, a little luck, a piece of plywood and some sponges.”

They built The Little Plywood That Could and it’s taking them to the World Championships. That’s the magic of STEM and teamwork at play.

The World Championships will be held in Detroit April 24, to April 27. Every team, from around the world, in the same level of competition will face the same challenge and it’s the challenge they faced in the competitions to arrive at the World event. The teams compete for knowledge, glory and scholarships.

Teams are largely self-funding, though most have some local support from sponsors. South Jersey Robotics offers fundraising help to FIRST teams. See its website for the Dragonators at:  www.sjrobotics.com/Dragonators/

In addition, to help cover the costs of their trip to Detroit this month, the Dragonators have set up a Go Fund Me page at: https://www.gofundme.com/dragonators-are-going-to-worlds