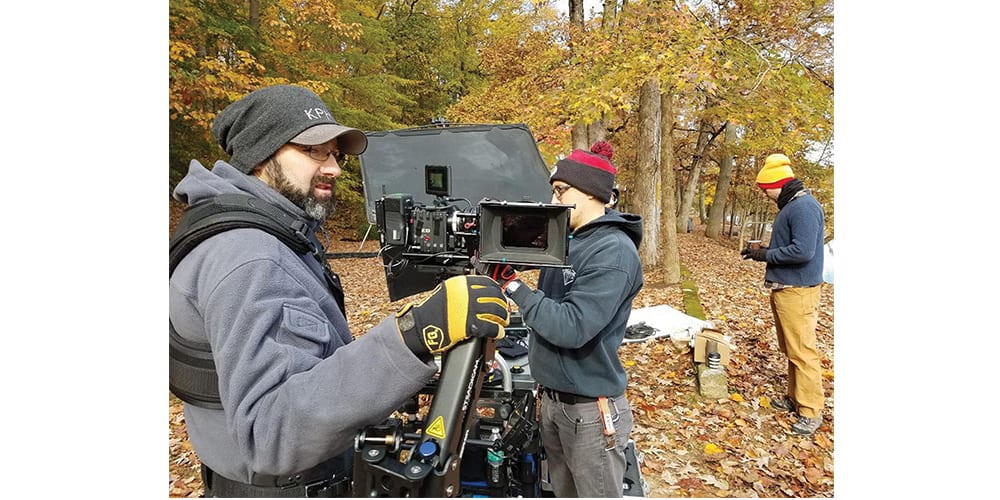 A father who struggles with addiction. A single mother trying to decide what’s best for her autistic child. Conflicted friends who want to do the right thing. Haunting memories warning of the cycle of addiction. And forgiveness and redemption, all under the umbrella of God’s love and guidance.

Any of these could be the theme of a successful film. But “Right Before Your Eyes” offers all of them. The small-budget production won Swedesboro’s KPhat Productions multiple awards at the 12th Annual Philadelphia Independent Film Festival in May.

“Right Before Your Eyes,” is based on Director David Vincent Bob’s true-to-life life experiences and is the story of a man recovering from addiction and his journey home to visit the autistic son he has not seen since birth.

Committing to “Discovering and showcasing globally and locally produced work by filmmakers who have created a unique cinematic experience that does not feel restrained by traditional boundaries,” the Philadelphia Independent Film Festival hit its mark with “Right Before Your Eyes.” With its local shooting locations, unabashed Christian overtones, character-driven scenes, and tiny budget, the film certainly does not fit the standard mold.

Swedesboro native Roy Koriakin, line producer and writer for the film, knows that Christian films and autism are both current and hot topics. So, when his company KPhat Productions got approached to produce a film with both subjects, he knew that he and Joe Hennigan, Director of Photography for KPhat Productions and fellow Swedesboro native, would have to look closely at the project.

After reading the script and talking to the director, Koriakin and Hennigan had a genuine interest in taking on the film. Even though the pair saw first-time writer flaws in the script, they knew that the director was passionate about his personal story. Koriakin recollected, “Sometimes you bet on a person and the overall story, not so much the script in its current form.”

Besides the writing flaws, the script also suffered from plot holes and pacing problems. Koriakin told the director that he would need to rewrite the script to make the film work and for KPhat to be involved. Bob, like many first-time directors, was reluctant to give up complete control of his project.

To help address Bob’s concerns, Koriakin brought the script to a potential lead actor with an accomplished résumé, who said he would only consider taking on the role if it was rewritten to become more cohesive. So, Bob allowed Koriakin to do the rewrite. But even with the rewrite agreed upon, Koriakin said that it was still a tough decision to jump on board with such a tiny, low-budget film.

“Ultimately, as a company, we just don’t shoot films under 100k anymore,” said Koriakin. “Most of the big commercials we shoot spend that much in a day or two, not 12. Films that small are just so much work for too little reward.”

The solution, recalled Koriakin, was to scale back expenses by shooting locally. That’s how Swedesboro came into play.

Koriakin continued, “We told David if we were going to do the project, we would need to use the resources we could have access to. And we needed to use them to the fullest extent. So, in the rewrite I would write around locations in Swedesboro that we could access.”

Koriakin further explained that the key to making a small indie film is to be able to shoot in one location all day. Usually, this compels the crew to be extra creative by using one spot as several locations.

By doing this successfully, filmmakers can maximize the amount of shooting time in a day. And by having that time, it allows for artistic and interesting shots by the cinematographer and solid performances by the cast.

“It’s really all about figuring out which scenes are pivotal to the story and putting more focus and time on them,” Koriakin continued. “We know Swedesboro like the back of our hands, and we had multiple locations that we knew we could get full access to.”

As director of photography, Hennigan recalled, “It was a different kind of project. Even though it was super tiny with barely no budget and crew, we built in time for me to get some really aesthetically pleasing shots.”

“The story has a lot of coming to life and dying metaphors,” continued Hannigan. Because of this, Koriakin and Hennigan knew that it was important to shoot in fall to showcase the dazzling colors of the season, and to pick up on its underlying theme of death and immortality and the knowledge that tomorrow has no guarantee. “We have multiple scenes in Swedesboro Lake Park showing off the foliage and beauty,” explained Hennigan.

Hennigan explained that a majority of the film was shot on Steadicam, a specialized filming method that allows camera operators to steadily film while moving, without the normal shaking of a handheld camera.

“This was done for two reasons,” clarified Hennigan. “One, it allows me to move quickly to get multiple shots. There’s no setting up a 50 pound tripod, adjusting it, then readjusting. Secondly, it allows me to make the film fluid.”

Hennigan pointed out that the typical difference between small films and big Hollywood films is that small films are often stagnant and uninteresting. But with Hennigan’s ability to be fluid by using movement with Steadicam, it added another element to the story-telling process which works successfully in the film.

“Knowing when a film needs movement is something cinematographers learn over the years,” Hennigan explained. “When things get chaotic in the film, more movement is usually called for. When it’s calm, usually no or little movement is best.”

Koriakin addressed the emotional impact of the film’s subject matter. “This is the kind of movie where you are crying the entire last 10 minutes,” he recalled. “And for us, that’s a real success. There’s plenty of big studio movies that attempt this and fail.”

“We’re strong believers that with everything you do there is opportunity to learn something new and to grow in your craft. This movie taught us that a tiny movie can have a big effect on people,” added Hennigan.

If all goes as planned, the film will open in theaters in October. The director will be travelling around in an RV to promote the movie, and the distributor, myCinema, is in talks with KPhat to join him and document the journey.

A few years ago, KPhat worked on a larger Christian film, “Voiceless,” that played in 154 theaters across America. For a small film like [“Right Before Your Eyes”] to have such potential is special to Koriakin and Hennigan. If the film breaks into the mainstream, it could be a game changer for KPhat Productions, leading them to being sought out for projects with bigger budgets, bigger stars, and bigger profits.

Koriakin recalled the pleasure of shooting in their hometown of Swedesboro. “When producing films, you’re best if you can stay fluid in the way you handle them.  If it rains, and your scenes are all outdoors, you have to figure out something to shoot indoors.”

“Between the two of us, we can make a phone call and get just about any location you can imagine all within downtown Swedesboro,” Koriakin continued. It’s great having a town of people that believe in you and have your back when you need it. Thanks Swedesboro!”

Hennigan agreed. “With both of us from Swedesboro, we try to film as much as possible to show the beauty of Swedesboro and Woolwich. In such a small area we have so much diversity from lakes to farmlands to restaurants to small businesses.”

Regarding local businesses, Hennigan added, “The businesses support us and we support them as much as possible.” He said they always get Botto’s catering. The town opens up their facilities to  them and he said the people around town love having the excitement. It gives them something to talk about.

KPhat recently shot another movie in Swedesboro called “Sno Babies.” That movie has also been purchased and the distributor has an extensive marketing plan in place.

The company also shot their first distributed film “Living Will” almost exclusively in Swedesboro. They like to shoot in Swedesboro when given the chance, and if you see a film crew shooting in downtown Swedesboro, it’s most likely KPhat at work.

As for filming in Swedesboro during production of “Right Before Your Eyes,” Koriakin recalled, “We shot in and in front of my house; downtown; in, behind, and in front of my mom’s house downtown; the coffee shop; the town parking lot next to Tavro; the street next to Tavro; the closed-down railroad tracks near the circle; and got a bunch of beautiful shots at Lake Park.”

Koriakin and Hennigan both started their careers working for an MTV reality show called “Viva La Bam,” starring Bam Margera and Ryan Dunn, and shot in West Chester, PA. Roy worked as an associate story producer and Joe as a camera tech, which helped them cement their niches for KPhat Productions.

Working on “Viva La Bam,” a spin-off of the popular “Jackass” series, opened a lot of doors for the duo. “Jackass” was popular at the time, and when they revealed they worked on the show, people were excited to employ their talents.

Since then, KPhat Productions has shot over 30 feature films, worked on over 75 National TV shows, and filmed several more commercials. Some currently airing commercials you may have seen include such accounts as Wawa, The Flyers, and Esports.

The pair attributes the company’s longevity and success to a comprehensive blend of talent and cooperation between them. Koriakin explained: “Joe and I are a unique and good team.”

When Koriakin and Hennigan collaborate on a project, they offer over 10 years of continuity of experience in two major components of film production. This allow them to demand the best of each other.

As a line producer, Koriakin typically breaks down the script, creates and schedules a plan, then executes the plan while staying on budget. Having such a close relationship with Hennigan allows him to define a plan that he knows will work for his partner’s needs. “Sometimes it’s a bit of give and take. But, that’s also a part of the process,” Koriakin added.

“We are both super happy and blessed to be making a nice living doing what we love in one of the hardest industries to survive in,” he concluded. “There truly is no business like show business.”