A Summer Sports Camp that Provides Lessons on Basketball, Lessons on Life 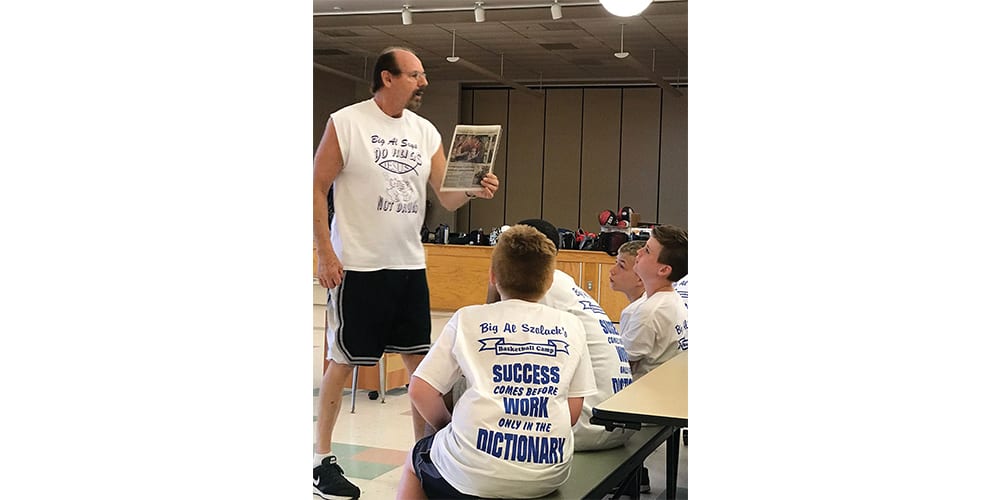 It’s what you would expect from a summer sports camp: a large, loud gym; voices and bouncing balls echoing with enthusiasm, whistles blowing, excited young athletes and counselors full of energy and focus.

Big Al’s Basketball Camp is held at the Harrison Township Elementary School each summer in July for boys and girls going into fourth through tenth grades.

Camp Director “Big Al” Szolack brings his experience as a pro exhibition basketball player for the Washington Generals, who toured as the opposition team with the Harlem Globetrotters.

From 1974-1975, Al played the positions of shooting guard and small forward and was known to be one of the favorites among the Globetrotters during their entertainment plays.

A native of Woodbury and 1973 graduate of Glassboro State College (now Rowan University), Szolack has been a motivational speaker for over 30 years and has been running his youth basketball camp for 16 years.

The camp’s coaching staff provides a wealth of experience and close supervision and consists of Al himself assisted by several varsity high school coaches and assistants.

Along with the drills and skills, the camp excels at teaching competitive play, by offering one-on-one, three-on-three, five-on-five, foul shooting, and “Hot Spot,” tournaments; and a special “Championship Friday” event each week.

Big Al also explains that the camp brings the fun back to sports, highlighting his belief that many youth sports have become too demanding and stressful for kids. Al noted that many kids give up on sports, admitting that they “stop being fun.”

This may be beginning to sound like the perfect sports camp for your child, but there’s so much more to it than athletics and enjoyment.

In his basketball camp, Al includes a version of his “Do Hugs, Not Drugs” program, with an additional emphasis on motivation, discipline, attitude and conditioning.

This year, the camp even provided a program on preventing sports injuries, focusing on the necessity of stretching before and after activity and the importance of strength and conditioning training.

But perhaps the most poignant and powerful part of the life lessons taught at the camp is Al’s personal story, which provides a big hit of motivation and encouragement, but also a good dose of warning to these impressionable young athletes.

As the opposition team for the Globetrotters, the Generals held a 0-wins, 245-losses record during Al’s time with them. Al thought he knew what it meant to be a loser, but he had no idea until his life took a drastic turn.

He confides how a single telephone call led him to take that destructive turn when he was 27. The call that his mother, and his best friend, had died, left Al seeking comfort in the wrong thing: drugs.

Upon hearing the news of her death, Al felt an emptiness in his heart and knots in his stomach. This led him to what he calls the biggest mistake of his life: saying “yes” to a so-called friend who offered him drugs to ease his pain.

Al started using cocaine and eventually became a big-time drug dealer. He continued along this path for 7 years, eclipsing with a $1,000-a-day drug habit. Al explained that it took someone who cared, a friend who gave him a hug and made him get help, to end this toxic phase of his life.

This decisive juncture inspired his motto, “Do Hugs, Not Drugs.” The motto has helped frame all of Al’s endeavors, from his motivational speaking engagements to his basketball camp lectures.

Al pulls no punches with his protégés, sharing with them honest and meaningful memories of a painful time in his life. “When using drugs,” he tells students, “you are killing yourself from the inside out, and you don’t even know it.”

During his talks, Al encourages self-control and responsibility. “Stop pointing fingers at the drug dealers. Because you don’t have to buy.”

Stating that he’s not proud of his experiences, Al noted that he is proud that he’s doing something about it. He asserted that his message is important for all to hear, as drugs do or will eventually affect everyone, either directly or indirectly.

When talking to camp attendees, it certainly seems like Al’s message is getting through. “Al’s camp isn’t just any old basketball camp,” confirmed Annalisa Cosner, age 15. “He told the story about how a hug saved his life, so his motto “Do Hugs, Not Drugs” is not just a cheesy saying.”

The fifth-year camp attendee and rising tenth grader at GCIT continued. “His story helps steer us away from the path of drugs and alcohol. I can’t imagine myself going down a path like that.”

Nineteen-year-old camp counselor Aaron Haines, who is studying mechanical engineering at Rowan College of South Jersey, explained how Al inspired him during the three years he attended the camp.

When asked why he came back as a counselor, Haines relayed, “It’s a really good environment that teaches life skills, and also teaches young men and women the right path. I would like to do for the little kids what Al has done for me.”

The bond and trust that Al has established among the young people whose lives he has touched is another thing that makes his camp so successful.

When acting as a motivational speaker to auditoriums full of high school students, Al asks all of the teachers, administrators, and other adults to leave the room at the conclusion of his speech.

This then allows for an honest and open dialogue between Al, the students, and their peers, something that the student are unlikely to forget.

This rapport with the young is certainly a gift that Al has developed, as students who return year-after-year are commonplace at his camp.

Annalisa Cosner explained another reason why his experiences continue to influence her. “Even though I hear Al’s story every year, I don’t get tired of it. I get emotional, and as I get older, I understand the details of his story more.”

“For God so loved the world that He gave His one and only Son, that whoever believes in Him shall not perish but have eternal life.”

Al couldn’t imagine losing a child and explained that the Bible verse related to his own pain and anguish. When both his daughters were born with illnesses, he feared that his previous drug use was to blame. During the height of the illnesses, Al asked God to spare his babies. Al’s daughters lived and thrived.

Al explained that God is now his comforter, not drugs. He believes that it is God’s nature to be with us when we are in mourning, overwhelmed, broken hearted, or sick.

He also encourages others to look for those who bring you comfort, and to practice providing comfort to others.

Despite the camp’s inspirational theme and life lessons, the athletic aspect of the camp still provides a strong pull among the campers. Mickleton resident Jesse Kunkle, age 12, has been attending the camp for four years.

“I like competing, especially the three versus three games. I also like shooting drills and competing against older people in the camp because it helps my game.”

Kunkle highlighted another popular feature of the camp, the Friday competitions, when parents are invited to attend and cheer on their athletes. “I enjoy the last day of the week competitions where the winner gets a ball signed by Big Al.”

Twelve-year old Jake Kershner, also of Mickleton, is attending camp for the fourth year and loves the Friday competitions. “There’s more energy with the crowd to support you and cheer you on.”

Thirteen-year-old Swedesboro resident Abby Bash, who has been playing basketball since third grade and participates on multiple teams and clinics, offered her praise. “This camp teaches me a lot while still being fun. Although some of the drills are a little challenging, they can help me meet my future goal of playing for the WMBA.”

Bash stated that the drills help her get a little better each day and reiterated one of Big Al’s mantras: “Practice makes perfect.” Other common camp themes are “Only one person can stop you from being a success…you!” And, “Success comes before work only in the dictionary.”

As a professional basketball player for the Washington Capitals, Al’s team was always destined to lose against the Harlem Globetrotters. But with the thousands of adults and children Al’s story has informed and inspired, he can now consider himself a true winner.