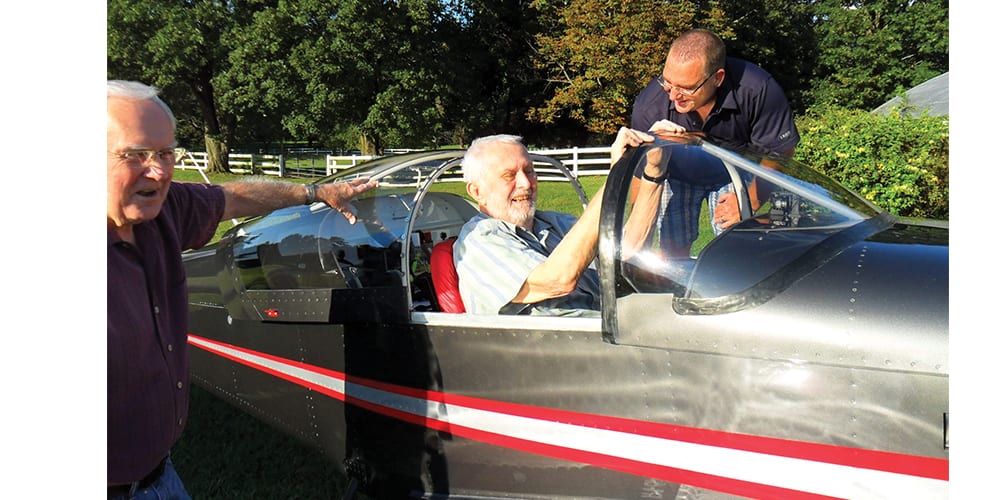 Kings Highway is a well-travelled route throughout the area, including the section between Democrat and Cedar Roads and Mantua Road in Mickleton. Many of us would be surprised to discover that the small but active Peaslees Airport is located right along that stretch.

The airport is on an estate which from 1777-1847 was owned by the Clark family, for whom the name Clarksboro is derived.

In 1847, the estate was purchased by the Peaslee family, and in approximately 1951, Amos J. Peaslee built the airport to use for his extensive travel and entertaining.

Peaslee boasted an extensive career, including as an Army Major who organized the first U.S. Diplomatic courier service that carried sensitive correspondence between Paris and Washington during World War I and the later peace talks, and even retained an original copy of the Treaty of Versailles which was later donated to the U.S. Department of State archives.

During World War II, Peaslee became a Commander in the U.S. Navy, and in 1952 was nominated by President Eisenhower to the post of U.S. Ambassador to Australia, serving from 1953-1956.

Later, he was influential in setting regulation of armaments and atomic energy, serving in the U.S. delegation at the London disarmament discussion and as an advisor to the United Nations.

Peaslee went on to author a multi-volume compilation of every national constitution translated into the English language.

When Ambassador Peaslee died, his children did not want to divide the estate, so they leased the property to Wick and Mary Cloud Hollingshead in 1978. Eventually the estate was divided and sold.

A few years later, the airport was sold to the Hollingsheads who wanted to keep the land from being developed. None of the family was interested in aviation at the time, so the hangar space was leased to offset taxes and maintenance costs.

Wick and Mary currently live in the Main House of the estate, which was built in the 1840s. Their son Keith Hollingshead, now 50, bought The Justice House, the original farmstead built in 1747. Other buildings on the property, including the Crib House, are unoccupied or leased.

One week in 1998 when his parents were away, Keith allowed a pilot to use an Ultralight (a type of motorized hang glider) on the airstrip. The pilot took Keith for a ride, and he decided right then that he needed to buy his own Ultralight.

He started taking flying lessons the next day. He’s been flying ever since, for about 22 years.

All of the planes used at the airport are single-engine and run on 100-octane low-lead gasoline, a fuel made especially for aviation. They are powered by internal combustion engines, similar to what runs your car.

Keith does most of his own upkeep and maintenance, but employs an A&P-certified mechanic to sign off on all the maintenance, as required by the industry.

Keith’s three children, all boys, are all pilots, and all engineers.

“Flying is definitely what inspired my boys to become engineers, and two of them work in the aviation industry,” said Keith.

Keith’s wife Eileen Hollingshead, a radiologic technologist, is from Philadelphia and has four children of her own. Eileen, though not a pilot, enjoys flying everywhere with Keith. She also maintains the airfield and runway, including a weekly mowing of the 9 acres.

Warren Spence, a resident of Clarksboro who lives less than an eighth mile from airport, is especially grateful for the Hollingshead family and how they fulfilled the wish of his dying brother-in-law.

In late summer of 2013, Spence realized that there was a small airport practically right across the street from his home.

Spence knocked on Keith and Eileen’s door, relaying the request of his brother-in-law and former pilot, Leland Cobb.

“Leland wanted to get up in the air one last time, and I explained this to the Hollingsheads,” he recalled.

Keith agreed to give Mr. Cobb a ride. When the day arrived, he was helped into the cockpit behind Keith, who flew over Leland’s childhood grounds in Shiloh and his last residence in Pennsville.

Spence explained that the Hollingsheads refused any type of compensation for the ride, including gas money.

“Keith and Eileen are special neighbors. They are very warm and compassionate people with a heart to give and serve,” confirmed Spence.

Along with Keith and his family, six pilots use the airport regularly. “Pilots pay monthly rent to store their plane and use the strip,” explained Keith.

The airport also offers temporary landing and storage options for private planes and helicopters, and the township can use the facility for emergency helicopter airlifts.

Peaslees Airport is currently out of hangar space, but is looking for more outdoor “tie down” customers.

The runway itself is a 2,400-foot grass strip, and only certain types of small planes can take off from this type of natural surface.

“We have lights for night landing and take-off, and both licensed and student pilots are welcome,” said Keith.

Because of its close proximity to the Philadelphia International Airport, Peaslees boasts the distinction of being the only small private airport in the country in Class Bravo airspace (as part of Philadelphia’s airspace). The Airport code for Peaslees is NJ25.

Because of this unique status and arrangement, some special rules must be followed by Peaslees.

But Keith explains that this causes no problems for the pilots. “We have a nice arrangement with the Philadelphia control tower.”

Keith and Eileen strive to be good neighbors and like to offer events to the local community, including an airshow they held this past August.

The airshow featured demonstrations by two acrobatic pilots, a “flour bomb,” antique planes, rides in a 1940 Waco, remote control plane demos, a live band, food trucks, a professional airshow announcer, a hang glider demo, and most of all, neighborly camaraderie.

Keith and Eileen hope to hold another airshow in 2020, but are seeking sponsors from local businesses to help cover the costs. To inquire about sponsorship opportunities, contact Eileen Hollingshead at belakids4@comcast.net or 267-918-4267.

Other community events held at Peaslees include a pumpkin drop near Halloween and a turkey drop near Thanksgiving. Pilots fly about 300 feet over a large “X” marked on the runway and try to drop their pumpkin or turkey closest to the X.

“The winner receives bragging rights, and it helps bring the flying community together for a fun event,” said Keith.

Interested community members can refer to the app “SocialFlight,” which lists airshows and other events at Peaslees.

Keith feels it’s important to promote the field of aviation, and does so by sponsoring organizations such as the Young Eagles, who encourage youth aviation and offer free rides to children between ages eight and 17. Those interested can visit https://www.eaa.org/eaa/youth/free-ye-flights

Peaslees also helps Boy Scouts earn their aviation badge by inviting them to use the airfield.

Keith and Eileen fear that aviation is a dying pastime, as many small airports like theirs are closing.

When asked about the perception of flying being cost prohibitive, Keith responded. “The costs can be managed. For children or young adults, there are tons of scholarship opportunities for flying lessons sponsored by the general aviation industry.”

Keith and Eileen encourage potential pilots to research organizations such as EAA (https://www.eaa.org/eaa) and AOPA (http://www.aopa.org), which offer aviation scholarships, and the Ninety-Nines (https://www.ninety-nines.org) which offer scholarships to young girls and women.

Keith continued, “Many pilots rent or share planes with other pilots. A small inexpensive plane can cost as little as an expensive car, around $40,000.”

When asked about the possible danger of flying small aircraft, Keith relayed that most accidents are pilot error and caused by those who are cocky and do stupid things.

“Also, technology has come a long way, especially weather technology, and it’s much safer to fly than in the past. With the newer equipment, pilots can see all of the air traffic around them,” he added.

Keith and Eileen love to travel and enjoy the freedom they get from flying themselves to many destinations. They explained that they can take day trips by plane that would need to be week-long trips if traveling by car.

“Our day trips have included places such as Nantucket, Martha’s Vineyard, Kitty Hawk, and Myrtle Beach. Nashville, Bar Harbor, Mount Rushmore, Key West, Oshkosh, and even The Bahamas have been some of their weekend destinations.

“We can fly from our house to Ocean City, NJ in 15 minutes,” said Keith. “It’s a 5-minute walk to the beach from the Ocean City airport. Even on the busiest summer weekend, we can go down, swim, and eat on the boardwalk.”

“We’ve even met friends for breakfast in Cape May,” added Eileen.

Keith goes on to highlight the conveniences. “My twins flew to Virginia Tech for their admission interview when they were just teenagers. They landed at the school’s airport, had their interview, and flew back the same day.”

He continued, “I think the fact that the school had an airport on campus was a big part of their decision to go there.”

“During the five years my sons were at Virginia Tech, I never once made the 9-hour drive. It was a two-hour flight door to door. The fact that flying is so fun made it seem like 15 minutes.”