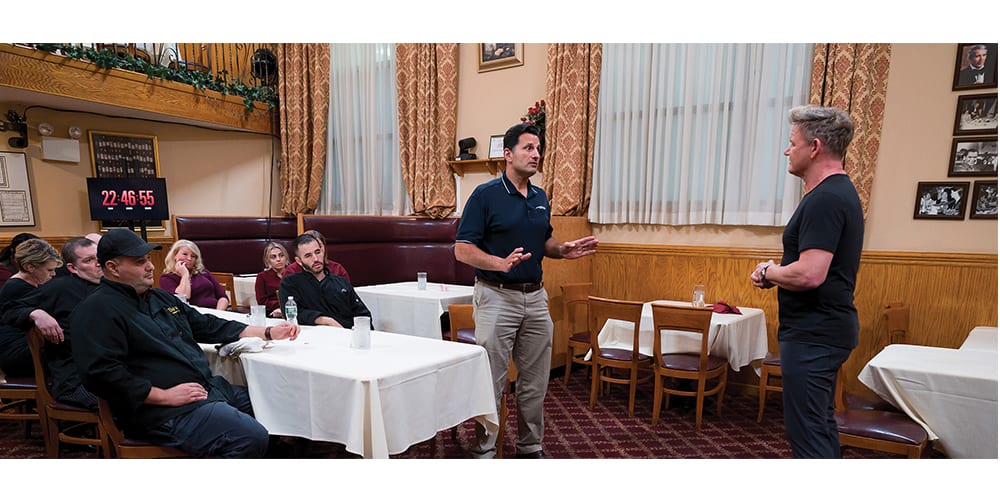 Not as a diner, but as part of his reality TV show. Ramsey brought his state-of-the-art mobile kitchen and his team of chefs, designers and decorators to the iconic eatery in October to film the “24 Hours to Hell and Back” hit reality show.

The chef, also known for his culinary perfectionism and volatile temper, came in disguise. Brothers Henry and Robert Botto, who both have a hand in running the restaurant, knew that someone would be arriving from a major network production, but did not know who it would be. Then on Tuesday, Oct. 22, the famous Gordon Ramsey showed up at their restaurant.

After revealing himself and analyzing the dining room, kitchen, and menu, Robert and Henry reported that Ramsey’s recommendations were to change the size of menu (too large), update the dining room (it looked like a funeral parlor), bring back focus and passion, and to keep the food simple and delicious.

When they first saw the renovations, Henry reported that they were very happy with the interior decorating team’s work and the changes made to the dining area.

“I was taken aback because I’m not much of a designer guy when it comes to fixtures and décor. I wanted to redo the room but I was not sure how it would be done, but it came out better than I ever imagined.”

The brothers asked Ramsey and his team to stay true to their father’s legacy when redesigning the dining area, and he did not disappoint. “The pictures on the second floor really show a tribute to our family history,” said Henry.

To complete the updated ambiance, the brothers even decided to add new carpeting and to redo the restrooms, at their own expense.

When asked if they were glad that they decided to be part of the show, the brothers agreed.

“Yes. It was an experience. It was exciting. You really see how Hollywood works,” answered Henry.

“It was a quick experience for Gordon but we got to see what goes on behind the scenes—all the preparation, the cameras, the teleprompters, the sound, the hair and makeup,” Robert added.

When asked why they would put their family business on the line by having it critiqued on national TV, the Bottos did not hesitate.

“When else is National Fox ever going to be in Swedesboro, New Jersey to promote the town and area?” questioned Robert. “And since then, we have also been featured on Good Day Fox Philly,” said Henry.

“The bigger our community grows the bigger we grow. It was an opportunity to put our business and town on the map of national TV in front of millions of people,” Robert concluded.

When asked how the show has affected business, Robert reports that the feedback from customers has been very positive.

“They are proud of us for putting ourselves out there, for putting our reputation on the line to improve the restaurant and the business,” said Robert.

The night the show was aired on national TV, Botto’s hosted a watch party, with over 250 invited guests and customers. The brothers relayed that everyone enjoyed seeing Botto’s being involved in a reality show.

Henry and Robert were able to make improvements to the restaurant menu based on feedback from Ramsey and his team, including cutting the choices down to a more manageable size.

Although somewhat smaller, the menu still offers the old standbys, like veal chop parmesan and veal chop Milanese. Henry notes that he wouldn’t allow the sausage à la Botto to be changed, and that he kept some items that Ramsey suggested they exclude, like the gnocchi, the mussels, the frutti di mare and some of the more popular chicken dishes.

Henry notes that these classic Italian dishes are popular among the local clientele, and his aim is to keep them happy. “We are still Botto’s and we have not changed our focus on customers. We are not London or New York. Our customers depend on coming for a good Italian menu at reasonable prices.”

But based on recommendations from Ramsey and his team, some new items have been added to the menu and are gaining traction among the customers, like polenta with wild mushroom marsala.

There’s also a new plating of the Sunday gravy meatball, and an improvement made to the veal chop, which is now pan roasted with fresh herbs and garlic and topped with Italian-style salsa verde made with long hot peppers, garlic, basil, capers, parmesan cheese, olive oil, fresh lemon, and anchovies.

Henry also noted that changing the menu to an à la carte format has allowed Botto’s to lower their prices and control their portions.

“And as a result,” he added, “people still have room for our delicious homemade desserts, which are more popular now than ever.”

The Botto’s sausage and meatball factory, run by brothers Dominic and Vincent, is now selling in over 27 states and still expanding. The factory produces Italian sweet and hot sausages, breakfast links, chorizo and andouille sausages and Italian meatballs.

Five years ago, the factory made a major capital investment by adding on a cooking facility so they could offer pre-cooked meals of sausage and peppers and meatballs and sauce to customers.

“For those who don’t have time to cook on a weeknight, this offers delicious Italian classics at great convenience,” explained Robert.

Exciting things are also happening in the market. This month, Botto’s plans to unveil its line of wines supplied by Kennedy Cellars in Hammonton. Six varieties, made from grapes from around the world, will be offered. The wines will be sold in the market and also offered as the house pour for the restaurant.

Robert and Henry are proud of the Botto’s name, and the rich history that it adds to Swedesboro and the surrounding area.

Robert and Henry’s parents, Robert Sr. and Catherine, came to Swedesboro in 1964 from Philadelphia. They opened a small grocery store in what is now the Pat’s Pizzeria building. The store offered freshly butchered meats, and it was during this time that Robert Sr. developed the famous recipe for Botto’s Italian sausage.

Eventually the Botto’s purchased the vacant C.W. Brown Sausage Company building. Botto’s introduced Italian sausage to all the local retailers. In 1973, they purchased the old Acme supermarket building which is home to the current Botto’s market. They closed and sold the old grocery building and moved into the new location.

The improved gourmet market opened in July 1997 and soon after, on February 7, 1998, Botto’s Italian Line Restaurant opened its doors to the community. This just happened to be on Robert Sr. and Catherine’s wedding anniversary.

Twenty-two years later, the Italian “Line” of foods and menu items, envisioned by Robert Sr., is evolving and improving, but never stops offering its best to the community.

Today, sons Robert and Henry together oversee the market and restaurant facility. Robert’s expertise includes running the market’s day-to-day activities as well as handling the finances of both businesses.

Fifty-four-year-old Robert, a resident of Mickleton, is also a butcher by trade, and sometimes lends a hand in that capacity in the market.

Forty-six-year-old Henry, a resident of Woolwich Township, holds a hotel/restaurant management degree from the University of Delaware and runs the restaurant kitchen. His duties also include overseeing the food and beverage services and inventory for the bar and restaurant.

Robert Sr. died in 2007, but 81-year-old Catherine, a resident of Swedesboro, still works seven days a week cooking market specialties, including her amazing Italian ricotta cookies. Catherine caps off each day with a good meal at Botto’s restaurant with family and friends.

Henry speaks of his mother’s daily ritual. “Our parents taught us that with hard work comes rewards, and what’s better than enjoying your reward of delicious food and drink at Botto’s with friends and family?”

Indeed. After all, isn’t that what life’s about?

Why not plan an evening at Botto’s with your own loved ones? Indulge in classic menu items and cutting-edge new offerings. Sample the new house wines, locally crafted from the world’s best grapes. All of this, close to home, in one of South Jersey’s most beloved Italian eateries.

Bottos’ Italian Line Restaurant and Market are located at 1411 Kings Highway in Swedesboro. They can be reached by phone at 856-467-1570 or online at https://bottos.com. Botto’s can also be found on Facebook and Instagram. Check back regularly for daily specials and upcoming events.