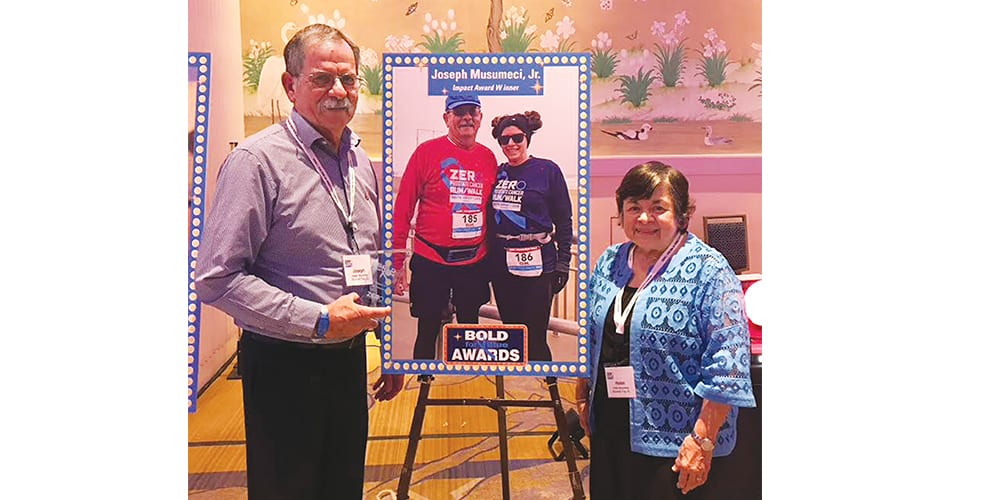 WOOLWICH TWP. – Joe Musumeci was one of three men awarded an Impact Award recently at the ZERO – The End of Prostate Cancer 2020 Summit at the Gaylord Convention Center in National Harbor, Maryland.

Joe and his wife Helen attended the Summit that had over 300 prostate cancer patients, survivors, and caregivers. Joe was one of 13 people nominated to receive one of three Impact Awards for their passion, drive, and ultimate impact on ZERO’s mission to end prostate cancer, and one of the three men who received the award.

Joe, a 7- year prostate cancer survivor and a ZERO Champion, was recognized for his involvement as facilitator of the Fighting Men Fighting Cancer prostate cancer support group, and for his work educating the public about the need for early detection of prostate cancer. The group meets on the first Tuesday of each month at the Sidney Kimmel Cancer Center at Jefferson Hospital, Sewell, and offers support to newly diagnosed prostate cancer patients, patients receiving treatment, and survivors.

Joe has participated in 10 ZERO Prostate Cancer 5K Run/Walks, including four in 2019, as a runner, fundraiser, and, along with Helen, as a volunteer. His group raised over $3,000 and was the largest team at the South Jersey race.

In addition to advocating for prostate cancer awareness, Joe serves as Secretary of the Kiwanis Club of Greater Swedesboro and as Race Director for the annual 08085 Run/Walk/Sit.

ZERO –The End of Prostate Cancer is the leading national nonprofit with the mission to end prostate cancer. ZERO advances research, improves the lives of men and families, and inspires action. Attendees at the Summit spent two days at educational sessions and over 100 ZERO Champions spent an entire day lobbying legislators on Capitol Hill for funds for research and awareness.  More information can be found at www.zerocancer.org.