Local Quadruplets to Celebrate Their First Christmas At Home 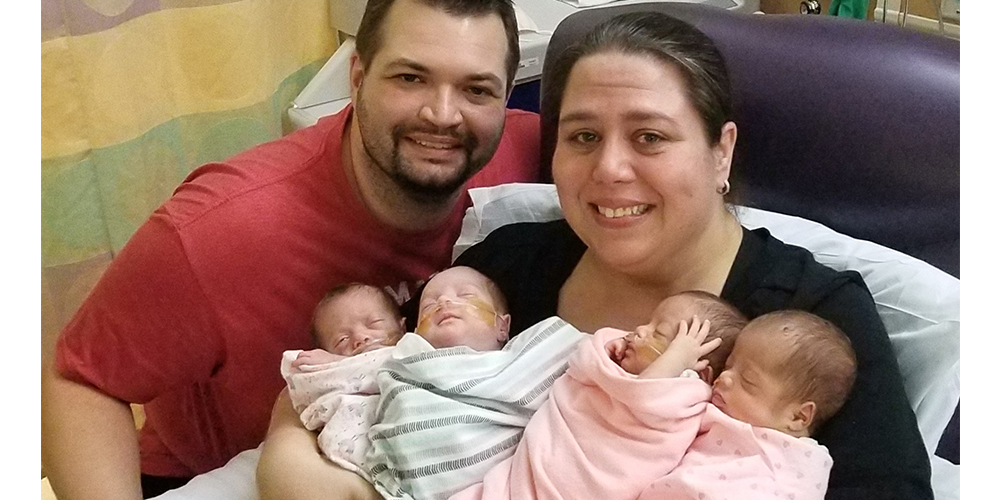 Our lifelong dreams often elude us. Even with abiding dedication, our best efforts sometimes aren’t enough. It’s disheartening, but life goes on, and we make alternate plans.

But sometimes, our tenacious struggles reward us, and we grab our dream with both hands and bring it to reality.

Such is the happy instance of Jennifer and Nicholas Stepenosky, whose 10 year dream of having a family finally came to pass on June 16 of this year, when Jennifer gave birth to quadruplets.

After a decade of multiple efforts including fertility treatments and a miscarriage, 36-year-old Jennifer became pregnant through her third use of in-utero insemination, or IUI.

While Jennifer’s doctor explained that there was a higher chance of becoming pregnant with multiples, it still came as a bit of a surprise.

“I was alone at my six-week ultrasound, and everybody got quiet. The ultrasound tech said the doctor had to talk to me, and I thought I was miscarrying,” she relayed.

“When the doctor came in and told me that the procedure worked, but there were five babies, I just laughed, because what else do you do?”

“I left the office and texted Nick, and said everything is fine. Then he called me.”

Then Jennifer told Nick that she was pregnant with five babies.

“I thought she was joking at first,” he began.

“It was a mixed bag of emotions. I was happy [the procedure] worked the third time, that was a bit of a relief, but there was also a little bit of panic, as one can imagine,” he said.

While Jennifer was originally pregnant with quintuplets, sadly one fetus was born prematurely and died at only 15 weeks into the pregnancy.

After the loss, Jennifer did some research on “high-order” pregnancies and found a renowned specialist for the care of women with multiples, Dr. John Elliot, who practices in Arizona.

Jennifer learned that Dr. Elliot is a recognized authority and publisher of groundbreaking articles on maternal-fetal medicine and high-risk OB patients, and his patients achieve high gestational ages for multiples.

The Stepenosky’s knew that their babies’ best chance of survival lay in his hands.

In April, Jennifer flew to Phoenix and checked in to Banner University Medical Center under the care of Dr. Elliot and his team. Jennifer underwent a cerclage procedure–a cervical stitch used when the cervix is at risk of opening under the pressure of the growing pregnancy. A month later, she checked back in to Banner and was ordered to bedrest for the duration of the pregnancy.

But the hardest part was that, due to the pandemic, her husband could not be with her.

Jennifer kept busy by continuing to work full-time as a bank employee from her hospital bed and kept in touch with her husband, family, and friends via Facetime and Zoom.

During her stay, the team was able to stop Jennifer’s premature labor several times. Finally, at 27 weeks and three days, and at three months premature, the team had to relent to the babies who would wait no longer.

Thankfully, Nick was able to fly to Arizona in time to witness the birth of their 4 babies, delivered by Dr. Elliot himself via C-section on June 16.

Because of the complex and dangerous delivery, Jennifer remained in the hospital for a week. After two months in the NICU at Banner, the babies were flown via air ambulance to AI DuPont, where they stayed for an additional month in that facility’s NICU.

Each baby reached developmental milestones at different times, so each was released from the hospital separately.

“We were extremely lucky that the babies did not have any serious issues. They basically just had to grow and gain weight,” Jennifer explained.

The last baby came home on Sept. 16, and the family was finally together and complete.

After all the activity of the past several months, the couple now faced the extremely happy—yet somewhat overwhelming reality—of caring for four infants.

With the pandemic in full swing and their babies being so premature, the couple had to limit visitors, which also meant limiting help.

Jennifer explained that although they received some family help, no one was able to stay overnight, so it was almost entirely the new parents doing everything on their own.

But she did recall some additional support and conditions during those early days.

“Luckily, the NICU got them all on an eating-sleeping schedule, every three hours, so we continued that at home,” she said.

“Neighbors, family, and friends also brought food so Nick and I did not have to worry about feeding ourselves, and that was really helpful.”

Nick, an electrical engineer, was able to work remotely after the babies came home, and due to the pandemic, is still working from home. This convenience and lack of commuting is also helpful to the couple.

Because Jennifer and Nick were not able to have a baby shower, they did not receive traditional gifts that are always useful to new parents.

But Jennifer reports that they received so many wonderful presents, some from people they never met.

Jennifer explained that they have Facebook and Instagram pages for the babies, called FiveStepsForUs. Generous page readers followed a link to their baby registry and sent needed items through the mail.

The couple also receives formula donations from various manufacturers. And if you think about how much four growing babies consume, this is sure to be welcome.

“As of November 11, the babies consume one can of formula per day, or 24 bottles total,” she calculated.

When asked what it’s like to be the parents of multiples, the couple was thoughtful.

“The biggest was the challenge of actually getting pregnant,” Jennifer began. “There are lot of people that need help. I tell them, try to stay positive––you just have to find the right doctor. I felt like this was never going to happen, I’m never going to be a mom, but it ended up happening for us.”

Many folks may wonder how parents of quads are able to tell such young babies apart. But Jennifer and Nick report that even at only five months of age, the babies are already developing distinct personalities. They also explained that the babies were assigned colors while in the hospital, and those colors still fit.

“Caitlin is the oldest yet the smallest, the big sister. She is small but mighty, because she is the fighter, having been so tiny. She will be a little comedian, she makes different faces, and is a content and happy baby. Her color is lavender.

“Elliot is the only boy and is pretty patient. He is a good sleeper and our best eater. As long as he is eating, he is happy. Something funny about Elliot is that he loves [the TV game show] The Wheel of Fortune, and his eyes are glued to the TV when it comes on. His color is blue.

“Since day one Addison has been the feistiest. Her color is hot pink and that is definitely her personality.

“Emilia, whose color is light pink, is a chill baby, she goes with the flow. She loves to eat and sleep.”

The couple also reported that the babies are starting to recognize them as their mom and dad, which is an exciting development.

In the Stepenosky household, Christmas has always been a big deal, and the couple likes to decorate and go all out.

But this year is bound to be extra joyous and memorable as they celebrate as a family of six.

When asked what the future holds, Jennifer and Nick said that they plan to set up a play room for the babies once they start crawling.

“Other than that, there’s lots of doctor’s appointment, check-ups. We just take it day by day,” they concluded.