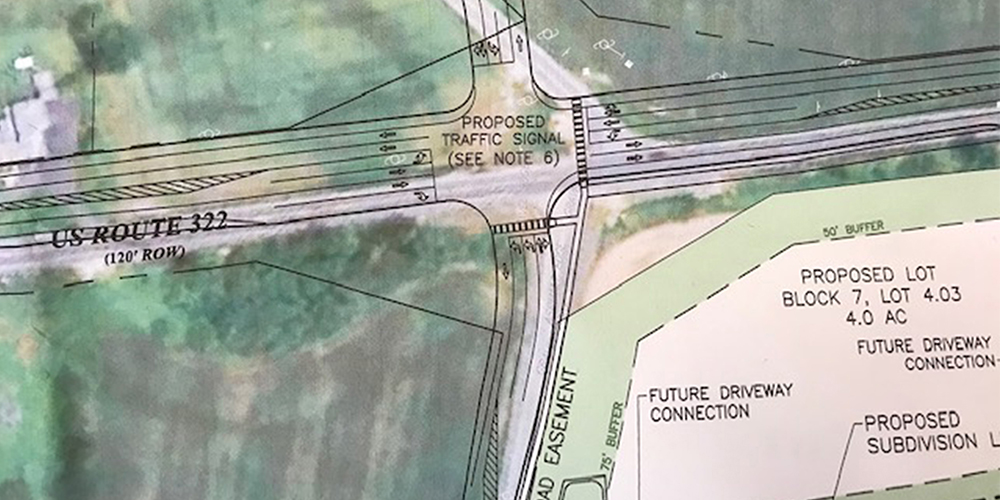 Woolwich Township residents and those who travel through the area are familiar with the new construction at the intersection of Center Square and Auburn Roads. This is part of the 10-year project known as Weatherby Town Center, with much development already completed.

Among the new construction is the Inspira Imagining and Urgent Care Center that held its grand opening last month, and an assisted living center that is currently under construction at the same bisection.

Many area shoppers will be happy to know that at the same intersection, next to the Franklin Savings Bank, a Zallie’s ShopRite project is planned.

“There’s just a few details to work out,” said Woolwich Mayor Vernon Marino of the project. “But it’s happening. We are committed and they [ShopRite] are committed.”

The mayor said that the shopping center plans still include high-end amenities such as a red brick façade and a café, as well as a two pad sites that may feature a fast food and a sit-down restaurant.

The mayor said that the upgrades to this intersection will benefit not only residents, but the region as a whole, and everyone who travels through the area. Drivers who turn left off of Locke Avenue on to Route 322 can certainly corroborate this.

“It is a difficult intersection to navigate,” Marino confirmed. He reported that the intersection will be widened but also straightened, since drivers must now make a slight turn before proceeding straight across the intersection.

“It will probably be completed this summer, prior to any warehouse construction, and it will look similar to the Kings Highway and 322 intersection layout,” Marino added, also noting that the project has already been approved through all the necessary channels.

Necessary to make the Kings Landing Regional Center a reality, Marino confirmed that all permits are in place for the new water and sewer line. The line’s official groundbreaking is scheduled for March of this year.

The mayor added that depending on the weather, he expects it to be operational in the spring or summer of 2022.

Marino reported that the township is still engaged in negotiations, but as planned, the Center is slated to include retail, residential, commercial, and warehousing. “The specifics on what will be built is economically driven,” Marino added.

Marino would like to remind residents that the permitting stage for the water and sewer line, before shovels even hit the ground for this type of project, is 20 months.

“There’s also a five-year moratorium on tearing up paved roads, and state and county requirements differ. Or we could go under the road, but that costs more.

“We also have to meet certain criteria and receive special permitting by the state DEP (Department of Environmental Protection) when we cross a wetland,” Marino continued.

Even with all of these hurdles, Marino is pleased with the progress.

“This [sewer line] has been one of the easier projects because all the partners agree that it is a great project, and we are all working in unison. It’s just the process that takes so long.”

Marino stressed that the township committee has been working hard every day to bring important ratables and jobs to fruition and always does the best it can for its residents.

“Once the 322 sewer line is in, it will absolutely bring tax stabilization to the township. And this is the most important thing to me and to the committee.”

Other approved Kings Landing Regional Center projects include three warehouses: one at the intersection of Stone Meeting House Road and Route 322, and two at the convergence of Locke Avenue and Route 322. All three are expected to break ground sometime this year.

Not yet completed but still planned is a second crosswalk connecting the end of Delaware Avenue to the multi-use path and park, ultimately providing pedestrian and bicycle access to all Weatherby residents.

Plans for the expansion of athletic fields and other amenities at Locke Avenue Park have been held up with state permitting.

“There will be multi-use fields and possibly one or two softball fields [softball fields differ from baseball fields as there are no pitching mounds]. We are hoping to break ground in the summer of ’21,” Marino added.

The mayor also noted that Woolwich Township has constructed less homes over the last 10 years than it did in the previous 10 years, and that this is evident by the influx of school students in the district.

“We’ve had a steady rotation of kids entering and leaving our elementary schools, and even Kingsway [whose students come from additional townships]. Between 2000 and 2008, we averaged a little over 300 homes a year built. Since the downturn in the economy, we have dropped to a low of 35-40 homes a year and are now averaging about 60-70 homes a year,” he concluded.

Over in East Greenwich Township, Mayor Dale Archer is excited about the recent completion of three light industrial warehouses. Archer detailed that all three are just over 300,000 square feet, with one on Swedesboro Avenue, one on Harmony Road, and the third on Huff Lane.

A fourth warehouse, planned for 700,000 square feet and also zoned light industrial, was granted approval and will be built at Democrat and Swedesboro Roads. Archer expects the groundbreaking to be sometime this year.

The mayor assured that more light industrial warehouses are coming, hoping to attract more businesses and jobs to the township.

“These warehouses are our first opportunity to bring in large ratables,” Archer relayed, and explained the tax arrangement being utilized to achieve this.

“We’ve never had this opportunity until we brought in these warehouses.

“The 30-year Pilot Program brings in over $30 million in taxation in 30 years, and 95 percent of that comes to the township,” he elaborated.

Archer stated that he is comfortable keeping 95 percent of the funds in the township to stabilize taxes, because the state plan is to get the schools fully funded. He added that with new legislation from Senator Stephen Sweeney, there is a guarantee that the schools will be funded appropriately within the next five years.

Archer, who has been mayor for eight years, is excited about the financial stability of his township, which is building a surplus.

Archer encouraged residents sign up for the township’s newsletter and alerts at www.eastgreenwichnj.com

“I want to be transparent, and I want people to know what we are doing,” he concluded.

In Swedesboro, some projects that were planned for 2020 have been delayed or postponed due to the pandemic, but many are moving forward.

Swedesboro Mayor Tom Fromm provided multiple updates, including delays to the mixed-use commercial/residential project in the downtown. But as of Jan. 8, the borough was close to having a signed “developer’s agreement” in order to get the project started.

Fromm reported that the developer’s application for the affordable housing complex planned for the northwest end of town was denied. “This project is very much up in the air at this point,” he confirmed

Last year, there were plans for a 145-townhome development on Woodstown Road across from the Swedes Plaza. The mayor relayed that the property was sold this past year, but the affordable housing requirements included in previous agreements and approvals have transferred to the new owners. Fromm said that borough officials will be in contact with the new owners to discuss the site’s plans.

Outdoor improvements have been put on hold due to the pandemic, including Glen Echo Park modifications, refurbishment of the Racoon Creek boat ramp, and a new 9/11 memorial. But the mayor relayed that plans, estimated costs, and some grant money are ready to be utilized for these improvements once the pandemic situation has improved.

But perhaps the most significant news in Swedesboro is that the borough will finally be able to permanently close its aging sewage treatment station.

“The Borough has signed an agreement with the Gloucester County Utility Authority (GCUA) to tie into the county sewer system and decommission our sewage treatment plant,” Fromm began.

Swedesboro proposed constructing a pump station that will tie into the new county line (the same one to run along 322 in Woolwich). The county agreed and the engineering and planning are under way.

“Once completed, this will be a tremendous improvement for Swedesboro,” said Fromm.

There is also a major sewer pipe rehabilitation project on the north end of town with completion planned in 2021.

“This project will include the replacement or relining of thousands of feet of pipe. This is way overdue and will have a significant positive impact on the amount of flow we will be sending to the GCUA plant,” Fromm said.

Fromm concluded by adding that 2021 will include the inspection, maintenance and painting of the borough water tower and the repaving of Leahy Avenue.