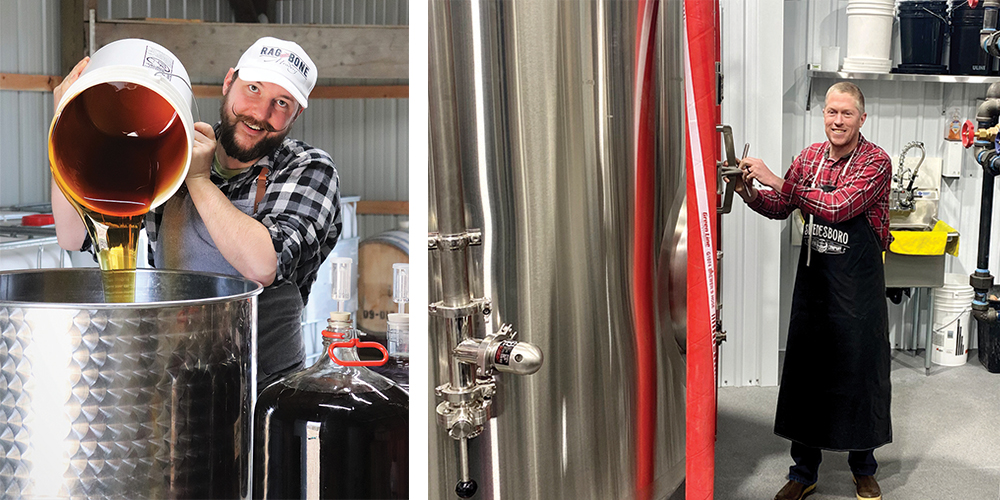 ABOVE LEFT: Rag and Bone owner John Turnea pours a 60-pound bucket of wildflower honey into a fermentation tank to make a batch of traditional mead. This recipe has just three ingredients: honey, water, and yeast. RIGHT: Swedesboro Brewing Company is proud to employ Head Brewer Andrew Swanson, who has experience as co-head brewer at Tuckahoe Brewing Company. Andrew also polished his skills by studying at the American Brewers Guild.

Tucked away at the corner of Fislerville Road and Route 77 in South Harrison Township is a wooded property which many of us have passed on our way to somewhere else. In the near future, this secluded gem may become your destination.

For here sits the destined site of the Rag and Bone Meadery, an intriguing venture began by young couple Nina Rosenberg and John Turnea.

“Mead and ‘honey wine’ are synonymous but ‘wine’ often has a misleading grape-based connotation. Mead doesn’t have grapes in it as a primary ingredient, but they can be a secondary addition.

“The flavor combinations for mead are truly limitless, so long as the majority of the alcohol comes from honey, the sky’s the limit on what you can do with it,” he continued.

“We make the majority of our mead as a still wine at 12 percent ABV [alcohol by volume] but we also have some really great sparkling varieties too. We will also be making a honey-apple hard cider known in the industry as a ‘cyser’.”

Rosenberg and Turnea also noted that mead is naturally gluten free, and their mead will be certified kosher.

It’s also important to realize that mead is not a new trend, but has a rich and broad history. Turnea explained.

“Mead. . . is too often pigeonholed into Norse/Viking history. Almost every culture that brewed and had access to bees made some kind of mead—such as Rome, China, Africa, and Mesoamerica.”

The story of the birth of Rag and Bone is both romantic and unique, just like the mead itself. Turnea explained. “[Nina and I] made mead as a fun homebrew project for our third date. We fell in love with it (and each other) and the rest is history.

“Together we started to research and recreate historical mead recipes. Our love of the craft grew, as did our homebrew space, until we had to dedicate an entire out-building on the farm to the endeavor. Eventually, our mead making outgrew that as well, and that’s when we began to realize the dream of Rag and Bone Meadery.”

The couple’s excitement is heartwarming and infectious, and their mission and shared history are inspiring.

“Our business is nurtured by the love of the land, the revelry of our community, and an ample dose of imagination,” Turnea continued.

“We chose the name Rag and Bone Meadery to honor both of our family’s histories. Nina and I are third generation “rag men,” whose families made a living selling at markets. We were selling on our own when we met, and started going to markets together. It was a happy coincidence to discover this shared history, and it brought us closer together.”

Rosenberg has lived on the farm since 1992, and was excited to show off the site of the future tasting room, a spacious antique greenhouse, circa 1904.

“The farm is a really beautiful place, but we might have to move the bee yard a little further back. We already have people who want to get married here,” the couple reported.

While the greenhouse and farm show great potential, they clarified the timeline.

“We are focusing more on the ability to make the mead first. We are making the decision to launch directly into liquor stores and direct sales online. We also plan to be very visible at events and festivals across New Jersey.”

So, when can you stroll into your local liquor purveyor and pick up a bottle of locally made mead?

While Rag and Bone has the federal go-ahead, they are still waiting on state licensing and approvals. If all goes as planned, products will be released in spring of 2022.

Rag and Bone is sure to be a welcome addition to the local landscape.

“As a farm meadery, we will be proudly participating in South Harrison’s legacy of agricultural excellence,” Turnea began.

“If we can’t supply an ingredient ourselves, we will be turning towards the greater farming community to obtain ingredients.

“The honey will be cultivated on our farm and/or purchased from local apiaries. The same will be done for the secondary ingredients such as fruit, herbs, and spices,” he concluded.

The couple graciously provided samples of three meads. All were deliciously drinkable, but most surprising were the flavor variations they were able to coax from the honey and flavorings. The following tasting notes attempt to express that in words.

Elderflower Lemon Mead, 12 percent ABV, color: translucent amber. A heady honey aroma might signify a cloyingly sweet taste, but this mead is surprisingly subtle and refreshing, yet still gives that wonderful honey pop on the tongue. Notes of lemon and elderflower enliven the finish. At 12 percent ABV, it’s strong enough to enjoy in a snifter by the fire in winter, but mellow enough as a reviving summer imbibement when poured over ice.

Guter Met, 14th Century Bavarian Hopped Sage Mead, eight percent ABV, color: dusky pale sun yellow. Hops are presented in equality with the honey in the aroma. This flavor is transformative on the tongue, revealing the dry earth notes of the sage blending well with the bitterness of the hops, yet finely balanced by the honey. This mead will appeal to a large variety of palates.

Lavender Lemon Mead, 12 percent ABV, color: amethyst crystal. Earthy and astringent lavender notes are immediate in the nose, and rounded out by the balancing citrus of lemon. The bouquet harmony is also evident in the tasting. This unique concoction highlights the duo of flower and citrus, and is akin to the first hyacinth and daffodil poking up through the snow. It’s the essence of springtime.

Let’s travel a few miles down the road (employing an Uber or designated driver, of course) to another exciting locale: Swedesboro’s very own brewery!

The Swedesboro Brewing Company, in the Swedes Plaza on Woodstown Road, is hoping to open this month. The location will act as both a brewery and a taproom.

Several years ago, the two friends launched a successful healthcare-focused advertising agency, exercising Bowe’s talents as an ad executive and Bain’s experience as a research pharmacist. Their business savvy, strong partnership, and passion for brewing sound like ingredients for success.

Although the brewery’s 10-barrel system is relatively small, it was designed with the same quality controls utilized by national breweries, ensuring customers and patrons a premium product.

A tour of the brewhouse quickly reveals that this is not merely a marketing promise. Visitors will be struck by the skillfully planned layout and design flow of the brewery’s top-quality equipment, and the sanitary and safety conditions to keep the product pure and the employees safe. There’s even a laboratory for testing the viability of yeast under a microscope.

Bowe and Bain are confident that the brewing itself will be in good hands with their choice of Andrew Swanson as Head Brewer.

“We wanted a dedicated brewer who understood and appreciated the technical aspects of production brewing as well as someone who had the love for making and experimenting with beer styles that oftentimes are found in home brewers like ourselves,” they explained.

Swanson believes that the Swedesboro Brewing Company’s collection will be diverse enough for all tastes.

“We hope to help make craft beer accessible to more people through sharing our ideas and brewing quality beers that both craft novices and connoisseurs can appreciate,” he said.

Bowe explained that distribution is key to the brewery’s success, so don’t be surprised if you see one or more of their wares on display next time you visit your local retail store, bar, or restaurant.

The partners also hope the taproom will become a local watering hole where you can sample the goods.

The venue is cozy and rustic, and a first-time customer will immediately feel welcome and comfortable. The family-friendly atmosphere will include hand-made soft drinks for young customers. Plans to accent the décor with local beer history and memorabilia will add the finishing touch.

“We have a bit of a nostalgic and throwback vibe like the breweries of yesterday, when many saloons were truly a place to sell one’s beer,” Bowe said.

“The atmosphere is very inviting, one where patrons can kick back and enjoy some quality beer with friends and family without feeling like their experience comes second to the production/distribution aspect of the business,” he added.

The brewery plans an impressive array of beer selections, with a rotating collection of 36 variations, of which 12-18 will be on tap at any one time. Each has a name evoking local flair, such as “Borough’s Best Pilsner,” “King’s Whey Milk Stout,” and “Harker’s Glory American Pale Ale.”

“We are starting with brewing many traditional styles of beers, like lagers/pilsners, stouts, porters, IPAs and other ales. Our focus is to bring back traditional beers of high quality that were lost in beer manufacturing in the states almost a century ago due to Prohibition,” Bain explained.

“Only now are we getting back to the number of breweries and varieties of beer we saw pre-Prohibition. We hope that small-scale local brewing grows back into one of the leading manufacturing industries in America as it was prior to January 16, 1919.”

The partners affirmed that another goal is to be an integral part of the community.

“We live in the community and we want to be part of the successes our area sees in the upcoming years. We have goals to sponsor local sports teams, participate in community events, and bring additional foot traffic to small businesses localized in the same plaza as the brewery.”

You can visit Rag and Bone Meadery and Swedesboro Brewing Company on social media or online at ragandbonemeadery.com and swedesborobrewing.com. Be sure to check regularly for news and updates.