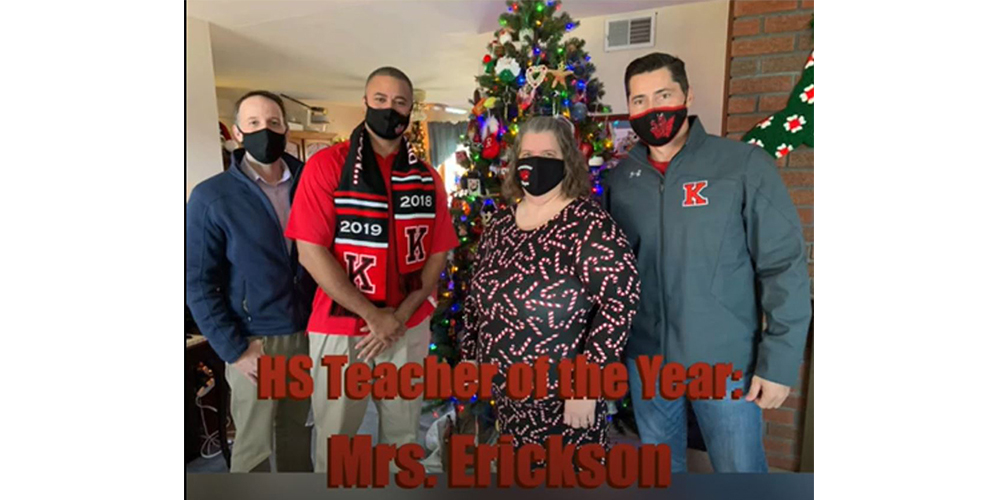 A Kingsway alum, Erikson has been teaching for 28 years with all but one of those involving teaching math at Kingsway. She spent her very first year teaching first grade in a Christian school.  Erikson actually said that she still implements that creative influence she used to make activities and decorations for her first-graders into her teaching today.

She is the longest-tenured AP teacher in the school and has taught AP Calculus for 26 years with some algebra, algebra II, and pre-calculus being “sprinkled in” as well.

Question: What made you get into the field of education? Was it a career you planned on having from a young age or did you find interest in it at a later point?

Erikson recalled a key point in her childhood, remembering that she wanted to become a teacher from as young as the age of three. She remembered helping her nine-year-old sister learn her times’ tables with some flashcards, and although she obviously did not know the answers herself, Erikson was able to help by showing her sister the cards, essentially quizzing her on the material. She said she remembers the satisfaction from helping her sister learn, and from that point on, she knew that she wanted to become a teacher. However, she informed staff that it was not until she enjoyed taking algebra in eighth grade, that she knew she wanted to teach specifically math.

Question: What is the most rewarding aspect of being a teacher?

She said it is especially rewarding to “see the students finally understand a hard topic and being able to see that ‘lightbulb moment’ go off in their heads”. Erikson also relishes in seeing her students succeed in their adult life after graduating, as she recalled that she has previous students now working as lawyers, as accountants, and even one working at NASA. Through social media, she also was able to see one of her past students now working as a teacher herself, and Erikson says that seeing them do what they love, and knowing that held a small role in that, is a nearly unbeatable feeling.

Question: What are some common misconceptions that students have about teaching and teachers themselves?

“Students sometimes assume that you only work during specific hours and are off all summer, but in reality, the work is never truly done”, said Erikson, informing all that she often works many hours after the final bell rings and has to balance all of it with maintaining her family life, which can definitely prove to be a challenge at times. Students also sometimes get upset when tests and quizzes are not graded quickly, and she said that is because teachers have many other educational tasks to complete as well.

The same thing goes for emails sent to a teacher late after school is over, and an immediate response cannot always be expected. She also recalled that some students also think that their teacher does not like them or the class when the opposite is actually true. She noted that the teacher is just trying to challenge them to see the class or student reach their fullest potential.

Question: How have you managed to still be successful whilst transitioning to hybrid teaching?

Erikson joked, “The number one trick is marrying well!” crediting her husband who works in the IT Department at the school for helping her get through technological issues she had at the beginning of this transition. “It’s like having a personal IT guy,” she continued.

In the past, Erikson said that she has struggled with change, but because she is now being faced with so much of it, she’s been able to switch that over time, maintaining the mentality that “it’s always a new day”. She explained that she has learned so much about technology over the past semester and is creating activities on sites like Google Slides that she would have never attempted previously.

Erikson said she has created some pretty neat activities and has even presented some of them to faculty during meetings. She is often inspired by Pinterest posts from creative elementary school teachers, taking some of their assignments and adapting them to the high school curriculum. Erikson summed it up and said, in this case, “You can teach an old dog new tricks”.

“She’s made learning Calculus this year extremely interactive and interesting, regardless of our new schedule” – Erin Gray, Class of 2022

“The high school math department is excited and honored that one of our teachers was recognized as the teacher of the year. Mrs. Erikson sets high expectations for every student in each of her classes – but nothing compared to the high standards that she holds herself to as well. Mrs. Erikson is always working to make her program as strong as it can be and welcomes input from all departments and faculty members. No matter the circumstance, Mrs. Erikson will always look for the best in any situation and in anyone that she encounters” – Math Teacher, Laura Reynolds