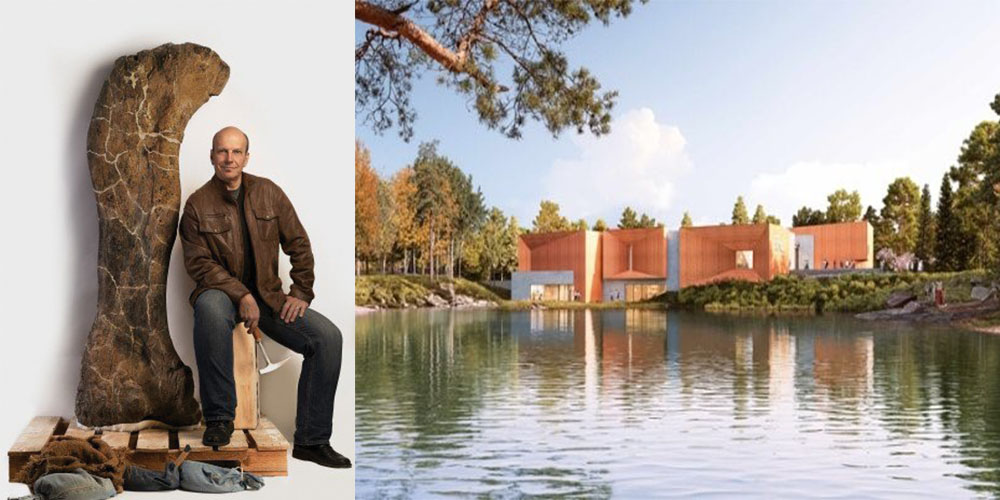 What could be more fascinating, or more fun, than digging with your friends or family in sandy dirt and finding a bone or scale or tooth of a way, way, WAY old animal from millions of years ago? There is a place for digging like that and there’s a reason that so many ancient animals have left parts of themselves in the sand.

There have been five known mass extinctions in our world, beginning with the Ordovician Period of 440 million years ago when 85 percent of all living species died. Most of them were marine life, since water covered most of the earth, and the cause, it’s theorized, was a climate change after continents began drifting apart.

The Devonian Period of Earth’s history, 375 million years ago, brought a mass extinction that killed 80 percent of living creatures just as life was beginning to flourish again.

The mass extinction of the Permian–Triassic Period, 252 million years ago, is often called “The Great Dying” because 96 percent of all species died. It took some 10 million years for the planet’s species to recover from this horror, thought to have been brought on from gradual climate changes possibly due to volcanic activity.

The Triassic–Jurassic Period, 201 million years past, so popular in movies dealing with dinosaurs, lost a third of its marine animals, amphibians, and related species of dinosaurs, possibly due to climate change brought on by volcanoes, though that is not yet substantiated.

The fifth and last mass extinction occurred during the Cretaceous-Paleogene Period, when dinosaurs ruled the Earth for about 165 million years until 65 or 66 million years ago when a wayward asteroid struck the planet and possibly wreaked havoc with the climate. Driven to extinction were many species of mammals as well as dinosaurs. As much as 75 percent of all living animals were lost.

But this is now and only a year or so ago, you could decide, on a whim, to visit the Fossil Park in Mantua, where a sand quarry holds many remnants of extinct animals. The visit would be courtesy of Rowan University, which owns the quarry, and you would likely come home with a bona fide historic fossil of some animal or another.

The quarry, open a few days a week, was a popular destination. It is a memorable experience, visitors have said, to dig like a paleontologist and find your own link to past millennia.

But the pandemic has halted the digs at the quarry since last year. Happily, however, this bad news is the inspiration for some really good news for anyone interested in the mysteries and recoveries of parts and pieces of the once-alive past.

Fossil dig days will once again be scheduled, said Dr. Kenneth Lacovara of Swedesboro, who founded the Rowan University School of Earth and Environment around seven years ago. As a renowned paleontologist, famous for the discovery, during a dig in Argentina, of Dreadnoughtus schrani, the largest land dinosaur that ever roamed the Earth, and as a graduate of Rowan University in Glassboro, he was recruited by Rowan to teach.

Once there, he took an interest in the quarry in Mantua and helped pave the way for discussion between the university and the town toward a goal of buying the quarry with a funding gift provided by Jean and Ric Edelman, also alumni of the university. The quarry will open for digging again next year, Dr. Lacovara said, and it will be a secondary attraction to the Jean and Ric Edelman Fossil Park Museum now under construction.

The Park Museum opening is planned for next spring. “It will be an immersive, evocative experience,” Dr. Lacovara, who has been named executive director of the museum, said. “I am deeply involved in the museum,” he added. “We’ve been designing it for six years and it is built for the public, to entertain and inform. There are thousands of people from all over who want to experience the age of dinosaurs, and everybody hopes to find a 65 million year old fossil.

“This is not viewed as a fundraiser (for Rowan University)” Dr. Lacovara said. “That isn’t the point. It will be an educational endeavor that will connect the university to the world,” he said. It is also expected to be a tourist draw that will benefit Mantua and surrounding businesses.

Dr. Lacovara said the large museum will house three major exhibit galleries to present life-size dinosaurs, sharks, fish and many other marine creatures of the Cretaceous Age. The exhibits are chosen for “educational content”, and we will personalize the experience with text, films, “some very compelling,” the executive director said.

Besides compelling experiences, the museum will house a live-animal center, called Critter Cove, with amphibians, fish, a large lizard, and a virtual reality experience that will take you back 66 million years, Dr. Lacovara said, adding that Discovery Forest, which will grow in one of the biggest rooms in the museum, features an indoor experience with a learning kiosk.

There will be another room, the theater, in which short science-related films will entertain museum visitors

Dr. Lacovara noted that visitors, who will enter after buying a ticket, can register with the museum for ongoing “personalized” experiences. The museum web page will be able to recognize registered visitors and engage their attention with news or suggestions.

At the museum itself, there will be a café staffed by students in the Rowan University program for sustainable food that teaches techniques, biology and the business of growing food. Dr. Lacovara characterized the café as having, “a huge, beautiful veranda overlooking nature trails.”

There is even room to hold events, such as a wedding, the director said.

And there will be the very popular fossil digs in the mix of educational entertainment. “Every kid loves dinosaurs,” Dr. Lacovara mused, “and they learn about the science. We have over 500 schools from the Delaware Valley that have asked to participate in fossil digs.”

There is however, one more goal he hopes to bring to the visitors wading into the Cretaceous et al past. He sees climate changes as sufficiently dangerous to have caused mass extinctions again and again. While the dinosaurs could not, humans can limit such a threat.

The author of a well-received book, ‘Why Dinosaurs Matter’ (available at the Words Matter bookstore in Pitman, and from Amazon) he values the lessons we can learn from the past. “People protect what they love, and they love what they know,” he said.

The paleontologist side of him knows the past. The museum he has designed and oversees can be seen as a gift of knowledge and science to help protect the future.

No one wants a sixth mass extinction.