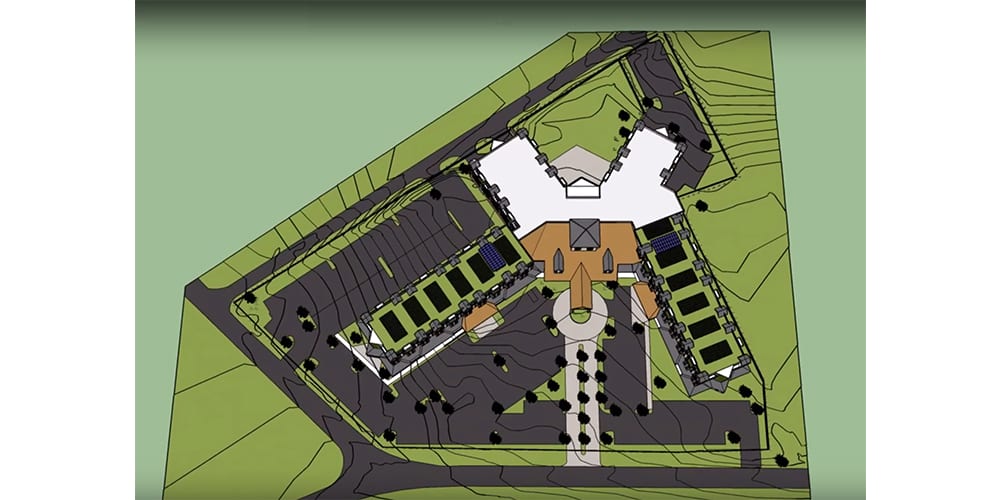 MICKLETON — Final site plan approval was given for a 300 unit multi-family low income assisted living facility by the East Greenwich Township Combined Planning/Zoning Board at a special meeting held on Feb. 4.

The project called the Clarksboro Commons LLC will be located at 290 E. Cohawkin Road in Clarksboro on the eastern corner of the intersection of East Cohawkin Road and County House Road. The property is bounded by Sesame Street to the north.

The parcel is approximately 6.96 acres in size and is located within the recently created Residential Multifamily/Assisted Living Zone. The applicant is also requesting the vacating of Sesame Street, which would bring the total lot area to 7.17 acres. A shared access drive to the Sesame Street properties is proposed.

The applicant is proposing the construction of a four story building consisting of 300 residential units. The units will consist of 150 assisted living beds, 100 affordable housing apartments, and 50 market rate apartments.

The township also agrees to donate at least $100,000 from its Affordable Housing Trust Fund to the project as affordability assistance after a certificate of occupancy is issued on the 150 unit family rental portion of the building.

Archer said that East Greenwich paid $380,000 for the property in 2009 with the intention of building a fire house. The township tried to auction the property in 2015 and only received a bid for $170,000. Archer felt that accepting that bid wouldn’t make financial sense to the taxpayers.

Presentations during the meeting said the final project will be somewhat like a hotel. “It will consist of a series of amenities like a library, chapel, pharmacy, gift shop and a movie theater,” explained Marshall Goldberg, a Licensed Nursing Home Administrator in New Jersey. “It will be four stories high with a green roof.”

A green roof is intended to be a passive recreation area. It will have solar panels and gardening plots. There would also be a multi-purpose room for special events for residents, and a real focus for seniors and veterans.

A number of residents will be veterans. They will have access to a rehab center and a fitness center. Socialization is being encouraged at the new building.

Goldberg mentioned that the social aspect is particularly important for primary care. “This is not an apartment house, but more like a resort,” he noted. “It’s a secure environment for the residents. It’s not a nursing home or a VA Hospital, but it will be their last housing option.”

“There will be a menu of services they can pick and choose from on a daily basis.”

Residents attending the meeting, mostly from Clarksboro, had their own questions. Kevin Purvis of Clarksboro wondered how close the proposed project was to his house. His question was “Does anyone want to buy my house? I’m squeezed out.”

Don Mertz Jr. of 21 Marino Drive in Clarksboro asked what can be done to stop the project altogether. East Greenwich Township Mayor Dale Archer suggested that opinions of the town’s professionals are taken into account during negotiations.

He said that New Jersey forces the township to fulfill affordable housing obligations every year. Clarksboro Commons would complete another of East Greenwich’s obligations. This year’s total number of units is 960. “We’ve gotten it down to about 350,” Archer said.

Michael and Audra Butcher of 57 Cohawkin Road in Clarksboro questioned whether the property values would be going down, depending on who would be moving into the neighborhood.

Judy Rosen of 61 Brown Terrace asked the panel to table their project. “I can’t imagine the traffic liability for the township,” she observed. “Are we going to have the chance to make any changes?”

Melissa Meisle of 49 Brown Terrace agreed with tabling the vote and agreed the plan would affect property values. Meanwhile, Jennifer Cronk of Clarksboro believes they need more acreage to complete their project.

Richard Borton of 176 County House Road compared his road to a speedway.

Lisa Kennedy of Clarksboro feels that the location is totally wrong because of speeding and the volume of traffic. “The trees in my front lawn are gone from cars taking them out,” she commented.

Attorney John DeSimone, representing Julia Rosenthal of 86 Sesame Street in Clarksboro, showed that Rosenthal had a permanent perpetual easement prepared for her family’s property in 1973. The farming property, which has been in their family since 1927, would have been cut off if Sesame Street had been abandoned and turned over to the developer as the plans called for. An agreement is being made for access to her property for vehicles and farm equipment.

Another public comment asked about ramps and handicapped accessibility, while another asked for a better explanation of affordable housing.

This project will consist of 150 family rental units. One hundred of those units will be affordable to low, very low, and moderate income households in one building, and 50 percent being marketed affirmatively to veterans. Also included is a 150 bed assisted living facility, with at least 15 of those beds qualifying as senior affordable units.

The building will have office uses on the first floor with 150 family rental units in one wing and an assisted living facility in a separate wing. The facility will be no taller than four stories not exceeding 60 feet.