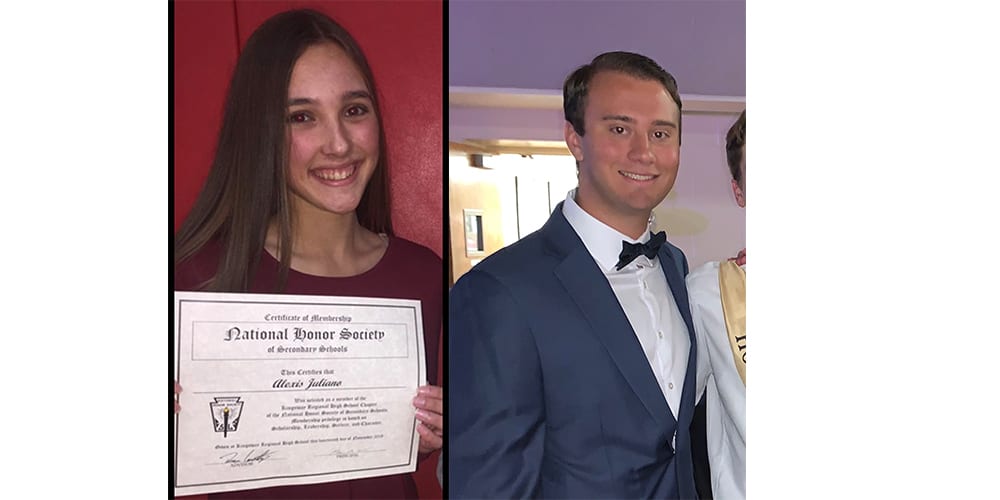 WOODBURY — The law firm of Hoffman DiMuzio has allocated close to half a million dollars to its Gift of the Heart Community Scholarship Foundation.  Each of the 21 high schools in Gloucester, Cumberland and Salem County has selected two students to receive a $1,000 scholarship for embodying the service ideals of the program.  The scholarship recipients from Kingsway Regional High School are Alexis Juliano and Jason Blanda.

Alexis’ love of volunteering began with her school’s homerun derby, held in honor of Ryan K. Iannelli, a Kingway graduate who passed away while serving our country. This experience inspired her to volunteer for a service project teaching elderly nursing home residents to use their cell phones to connect with family members.

During the summer of her sophomore and junior years, she volunteered at Jefferson Hospital’s physical therapy department where she assisted the therapists with clerical duties and later was given more responsibilities, including assisting patients with ice and heat therapy. Alexis has also volunteered for the Unified Physical Education Program, which creates an inclusive environment for special needs students. Volunteering has taught her that even small actions can make a significant impact upon others.

Jason’s volunteering began as a 7th grade student when he became a buddy for TOPS Sports, a community-based program where volunteers assist special needs children in practicing and participating in sports. During his first year with TOPS, he was assigned to buddy a young boy who was quiet, shy and hard to motivate. The season started with Jason and the student kicking a soccer ball back and forth in silence. As the season progressed, the child opened to him and became involved in conversations. Jason says he has learned as much from the children involved in TOPS as they have from him.

Woolwich Township has now dropped to eight place on the list of most COVID positive test results of the county's 24 municipalities. Of the local towns, Woolwich ranks highest on the list. First on the list is Deptford (473), then Washington Township (294), Monroe Township (231), West Deptford (128), Glassboro (110), Woodbury (84), South Harrison (81), and then Woolwich (79). East Greenwich has 49 cases, Logan 31 cases, Swedesboro 34 cases. ...