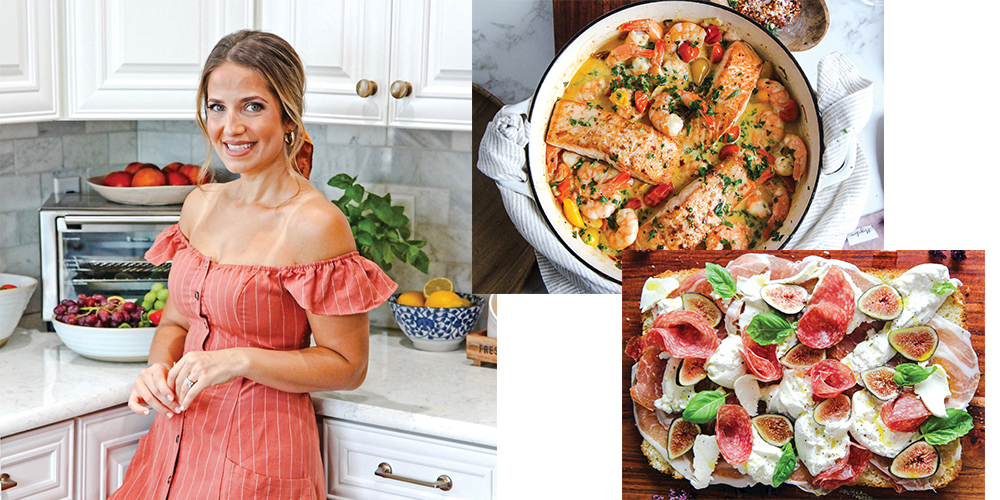 When we think of eating in Italy, South Jersey probably does not come to mind as a comparison. Most of us think of pasta, pizza, cured meats and aged cheeses.

But if you regularly enjoy the varied harvest available in this area, you share perhaps the most important and coveted ingredient that many Italians and other Europeans take for granted: fresh, local, seasonal produce.

Exactly the bounty that’s offered during the growing season in South Jersey.

So yes, she knows what she’s talking about.

Vitale, a native of Naples who immigrated to the United States at age 12, explained how Italian and American cooking and eating generally differ.

“The biggest difference in how Italians cook versus Americans, is that we take our love of seasonal ingredients very seriously,” she began.

“You’ll never see strawberries eaten in the winter in Italy, much like you won’t see oranges in the summer. We thrive on cooking with fresh in-season ingredients and I’m trying to raise my daughter to understand the importance of that,” she added.

But because of the availability of local seasonal produce, she and her family can feel at home in our region.

“We’ve been in South Harrison Township for six years now. We were drawn in by the peace and quiet, beautiful local farmers markets and local wineries. It felt like a mini Italy to me and I knew I wanted to raise my child here one day.

“On Saturdays (during open season) we always go buy fresh produce for the week and get so inspired to create content around what I find,” she added.

Vitale began her culinary career while in her teens working in her father’s pizzeria and bistro, but her interest in food and cooking came much earlier in life.

“I grew up in a family full of great cooks, and I’ve been inspired by their passion for it my whole life,” she said.

Vitale spent a lot of time with her grandmother, with whom she is still very close. Her first cooking adventure was the two of them making gnocchi together.

“My nonna is the best cook I’ve ever known. She cooks straight from the heart and can tell a great story just by what she’s cooking. She’s my biggest inspiration both in and out of the kitchen.”

Vitale left Italy in 1998, and one Sunday when especially homesick, she called her nonna and they made Sunday sauce together over the phone.

Vitale reported that this, and cooking in general, helped her connect with her family back home. And when she became old enough to cook in her father’s eateries, that connection grew into a passion.

But in 2008 when her father had to close his eateries, Vitale was unsure what her next steps would be.

“I found myself lost and not sure how I was going to re-enter the food world without having to work at a restaurant. That’s where the idea for my web series came in. I wanted to share my love for food with anyone who was willing to watch.”

In 2010 Vitale’s YouTube sensation Laura in the Kitchen was born. The prolific self-taught home cook features over 1,000 recipes complete with interactive video instruction. The success of the series is evident, boasting almost four million subscribers.

Vitale does not use a script when filming, which allows for spontaneous moments of humor and improvisation. Her upbeat and perky demeanor is enhanced by her easy charm, which make the videos both pleasant and entertaining. The instructions are well-paced and easy-to-follow, and her catalogue of recipes are varied enough to both instruct new cooks and inspire seasoned foodies.

The success of Laura in the Kitchen gained Vitale enough accolades to be noticed by the TV food industry, and led to her hosting a successful two-season Cooking Channel series entitled

Simply Laura. She has also made appearances on Beat Bobby Flay, the TODAY show, the Rachel Ray Show, Chopped, and others, and has penned a best-selling cookbook.

While Laura in the Kitchen offers an extensive catalog of meal options, Vitale has some personal favorites.

“My heart gravitates towards Italian food most often, perhaps it’s because it’s what I grew up eating; and therefore, it brings back good memories,” she began.

“Some of my favorites would be a simple tomato sauce with fresh garden tomatoes, lots of basil and infused with good olive oil and garlic, simply the best!”

“Another favorite I make on a weekly basis is my chicken cutlets that I serve with an arugula salad with shavings of parmesan. They are hard to beat!” she emphasized.

Vitale and her husband Joe, whom she married in 2009, work smoothly as business partners. Joe shoots and edits Laura in the Kitchen and also acts as her manager.

“He’s the one directly in contact with my agents, facilitating brand deals and doing all kinds of background work nobody sees, but he’s essential in our business,” she explained.

Perhaps fueled by the delectable fare he enjoys, Joe also displays skills as a designer and builder, most recently when he created Vitale’s home studio.

“Joe did indeed build our studio by hand. It was important that the studio was in our home so we could have full control over it. It’s a fully functioning kitchen all equipped with the proper lighting to make our lives a bit easier so there’s no tear down and reset every time we have to film,” Vitale elaborated.

Vitale offers some advice on how Americans can adopt some of the healthy aspects of Mediterranean cooking and dining.

“Our protein of choice growing up was seafood because my grandfather was a fisherman, so there was always an abundance of seafood, [and] meat was reserved for Sundays.

“I think the biggest difference is that Italians value meal time. We don’t eat on the run. We don’t grab fast food. We simply prioritize our meal times above anything else,” she concluded.

At only 34 years old and already an Italian food icon and mom to four-year-old Mia, Vitale’s path ahead is exciting and limitless.

“I feel like I’m just getting started. My ultimate goal one day would be to have my own syndicated talk show, launch some fun merchandise and write a few more cookbooks. I have big plans and goals and won’t rest until I achieve them.”

To experience one of Vitale’s delicious creations, follow her original recipe, below.

Salmon and Shrimp in a Parmesan Wine Sauce

This is the “it” seafood recipe at the moment in our household. It’s simply scrumptious but super simple to put together. You can use any seafood you’d like but also works well with chicken breast. Serve with rice pilaf or starch of choice, the sauce is outrageously good!

1lb of Shrimp, peeled and deveined

Salt and Pepper to taste

1. In a large skillet with high sides (or shallow Dutch oven) add a couple tablespoons of olive oil and garlic and start to sizzle over medium heat, meanwhile in a separate large skillet, start searing your seasoned salmon and shrimp over medium high heat (do this in batches) and remove to a plate.

2. In the Dutch oven, add the tomatoes, sun-dried tomatoes, a little parsley and basil and sauté for about 4 minutes.

3. Add the wine to the tomato mixture, allow to reduce by half. After reduced, add the cream along with some salt and pepper to taste, turn the heat down to low, and let it simmer for about 5 minutes. Stir in your parmesan and add the seared salmon and shrimp along with your remaining herbs, cook for about 5 minutes over medium heat, then serve over rice.

Vitale’s best-selling-cookbook is entitled Laura in the Kitchen and is available on Amazon at https://www.amazon.com/Laura-Kitchen-Favorite-Italian-American-Recipes/dp/0804187134/