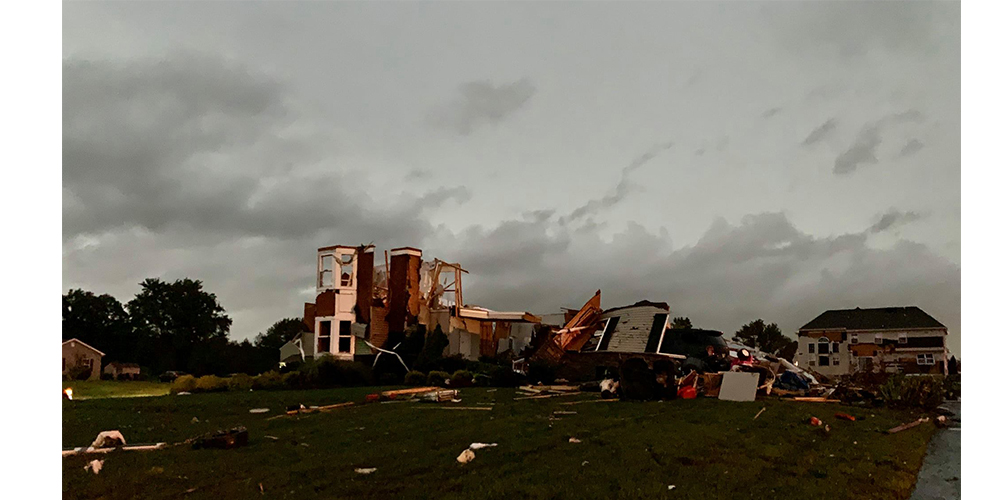 HARRISON TWP. – At 6:20 p.m. on Sept. 1, an EF 3 tornado touched down in Harrison Township, destroying homes in a development and demolishing buildings and tearing up farm buildings and equipment.

The tornado then cut a swatch of destruction through to Mantua Township and Wenonah leaving a dairy farm, a vegetable farm and a horse farm destroyed in its path.

According to Harrison Township Mayor Lou Manzo, over 140 families were affected, and 38 homes were deemed unsafe, meaning they were destroyed or damaged to the point of being structurally unsound and require demolition. The most destruction was in the neighborhood around Josephine Lane, near Route 77.

According to the Gloucester County Board of Agriculture, on the Eachus farm, many of the barns, hay barn, silos holding grain, equipment for field and barn yard and fields that were planted for fall harvest and winter feed were completely lost.

On the Grasso Farm, both their homes were damaged and uninhabitable. Farm buildings, greenhouses, trucks, and other equipment were destroyed. Vegetable crops survived but their equipment and buildings to harvest and pack the crops have been destroyed. “They are unable to continue farming on their own this season. This family just put their life savings into construction of a new packing and cooling facility that meets modern food safety standards. It was completed just last week,” stated a release from the county board of agriculture.

Neighborhoods were left with patchwork damage. Anything from completely demolished homes, to some left unscathed, others with roofs gone, and trees laid bare almost the entire path of the tornado.

But the community has come forward with more help and donations than could be handled at one point. Businesses were offering free meals and services. People were dropping off clothing and supplies, and complete strangers showed up to lend a helping hand with the cleanup. Even Philadelphia Eagles’ Defensive Tackle Fletcher Cox stopped by and helped with his time and donations.

According to a statement by Manzo from his Happenings on the Hill newsletter, “As this tragedy unfolded, strangers began providing help to those impacted by the storm. The number of volunteers ultimately rose in the hundreds. From the onset, the physical donations came pouring in at a rate that was overwhelming, exceeding the storage capacity at Clearview. There has been a flow of monetary donations coming from everywhere and there are multiple individual GoFundMe accounts that family, friends, and local organization set up for impacted residents.”