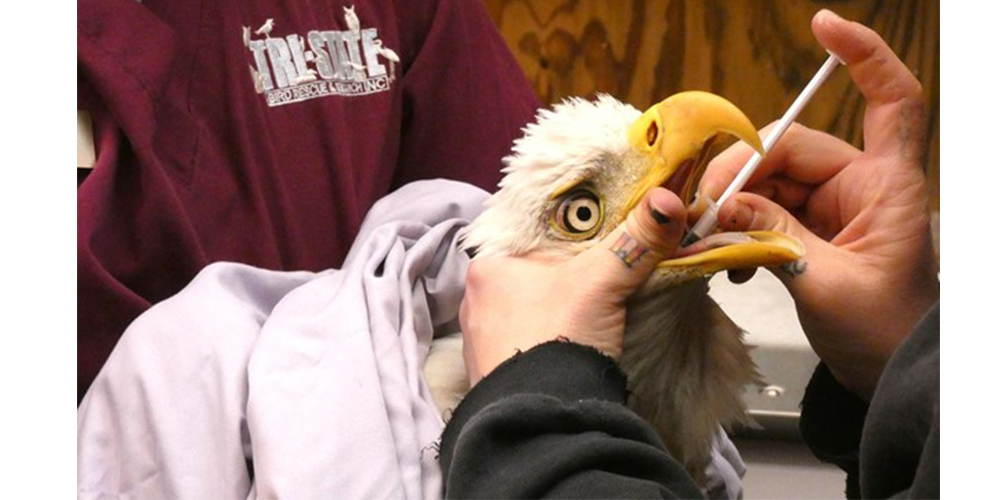 On the evening of Dec. 11, a bald eagle sat precariously in a South Harrison Township tree with assumed injuries but is now expected to make a full recovery thanks to the quick action of some hometown heroes.

Bill Michels, South Harrison Township Fire Chief, took the service call from residents who were very worried about an eagle perched for three hours with no apparent movement.

“We got on the scene along with our mutual aid company 231, which is Mullica Hill,” he stated.

Mullica Hill extended a helping hand because they were the nearest department with a tall ladder, something that South Harrison’s did not have as a “flat township”.

“We were looking at the bird, but there wasn’t much we could do. We’re not trained for that. We reached out to county communications and they said that animal control was on their way,” Michels disclosed.

When animal control arrived on the scene, the two departments and the representatives from the shelter worked together to formulate a plan. They eventually decided that one of the members of Mullica Hill must accompany the animal control affiliate up the ladder.

“All I did was just make sure the animal rescue officer was safe up on our ladder and that she was comfortable going up there to the height to reach the eagle,” explained Mike Paul Jr., Mullica Hill firefighter.

In addition to providing extra ladder security for animal control, Paul also used pike poles to pull the branch close enough to grab the eagle. He held the key, and the animal control representative grabbed the bird and placed it in the cage.

While the partnership of the two stations and animal control embodies the incredible results of cooperation between neighboring communities, it is evident that the eagle could not have been saved without the help of the residents who called the fire company.

“Unfortunately, I don’t have the information of the people who called it in,” claimed Michels. However, he explained that he was grateful for their quick response and concern for the bird.

A key decision of concerned citizens was making the call and deferring to the experts. Just like the fire company called county communications once they realized they were not equipped for the rescue on their own, citizens too realized what was needed.

Local officials hope to use the eagle rescue as an example of why it remains important for citizens to contact experts in similar situations. This ensures that no one gets hurt, especially the animals.

While bald eagle sightings are common, far less common are the need for eagle rescues in the area.

“Out in South Harrison seeing bald eagles is a daily occurrence. We see them all the time. However, I’ve been a member of South Harrison for 13 years and this is the first eagle rescue that I have ever been a part of,” Michels stated.

Although many residents are used to seeing firefighters as rescuers from all manners of situations, residents may not be familiar with how far out of their expertise some calls may take them.

“It was a bit strange at first because we had to go to a residence who had called because an eagle was stuck up in a tree. My first thought was that eagles are supposed to be in trees, you know,” claimed Paul Jr. He continued to explain that during his five years as a firefighter for both Mullica Hill and Washington Township, this was the first time that he had the opportunity to work with animal control.

According to Chief Michels, there is a distinct set of regulations that animal control was compelled to follow in caring for the bald eagle. As America’s national bird and a conspicuous symbol of patriotism, the safety of the bird encapsulated everyone’s utmost concern.

“I was just told that they needed to notify the division of fish and game within 24 hours of capturing that bird. Otherwise, they could be held responsible due to its significance” Michels affirmed.

Most residents of surrounding areas became aware of the situation due to photos circulated on social media from the Gloucester County Animal Shelter. Yet, many still await further information on the circumstances surrounding its recovery.

The shelter’s Facebook post explained that the bird was sent to the Tri-State Bird and Rescue in Newark, DE. The people involved in the initial rescue were not aware of the bird’s condition, unbeknownst to whether it was sick or injured. In a recent update from Lisa Smith of the Tri-State Bird and Rescue facility, she explained, “The initial examination showed slightly elevated blood lead levels, just above the level at which we initiate chelation therapy. The eagle was given medication to help lower the blood lead level, and also some other medication to help calm it initially”.

Heightened blood lead levels in birds are often a result of their explorative nature that allows them to be harmed by the ingestion of human materials. The rescue serves as a reminder to be conscious of residential and commercial waste because these disposables can have dangerous effects on local animals, in this case, the bald eagle.

She continued to mention that the bird was in an agitated state during its stay at the facility, which was most likely caused by the bird’s desire to protect its territory during the ongoing bald eagle mating season.

“No other issues were found,” Smith continued. “The bird spent several days in our large outdoor flight enclosure, which is 100 feet long. We were able to observe its flight and behavior on our closed-circuit camera system, and on Monday, Dec. 20, we released the bird onsite here at Tri-State”.

A common question from residents has been about why Tri-State chose to release the eagle in Delaware instead of its home in South Harrison. The facility made this decision out of fear that the bird may harm itself during transport. One of the philosophies is that, for birds, finding their own way home yields better results than being assisted.

The bird was tagged with a USFWS (United States Fish and Wildlife Service) band before its release to further track the success of its recovery.

The successful recovery of South Harrison’s bald eagle remains a testament to the successful collaboration and bravery of various community organizations.

“From our department, we would just like to thank Mullica hill for lending the assistance to their neighboring town,” concluded Michels.

Residents concur with his statement through words of gratitude and encouragement for their local firefighters and other hometown heroes. All who were involved were proud to be part of such an uplifting moment for their town this year.

To read more about when you should call animal control, visit: https://www.gloucestercountynj.gov/civicalerts.aspx?aid=217

The Animal Control Office is open Monday, Friday & Saturday from 8 am to 4 pm and Tuesday through Thursday 8 a.m. to 7 p.m.

We ask that residents report only emergencies on the system and use the non-emergency line for any other information.