Warehouse projects changing the landscape of the area 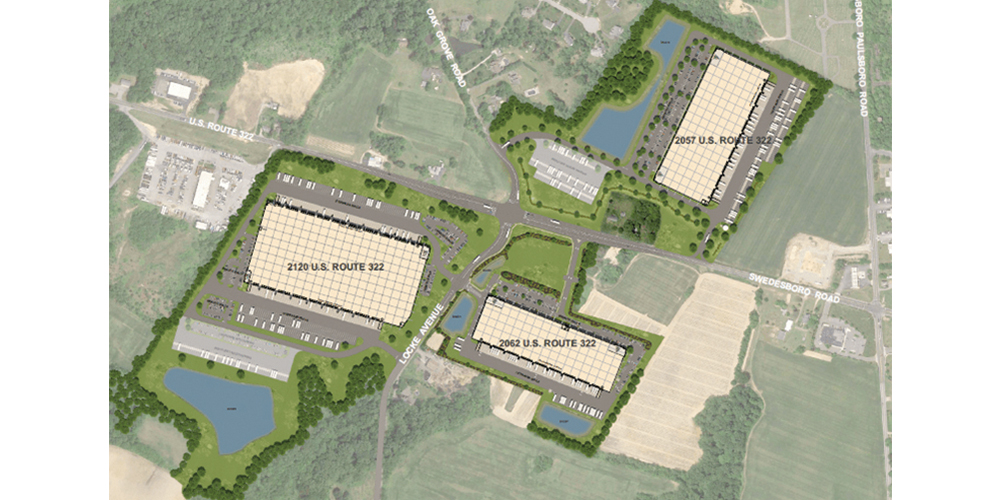 Photo above: MULTIPLE warehouse projects are taking place in Woolwich Township, Logan Township, and East Greenwich Township. For updated information on their progress and what is to come, see page 5. Above is an artist’s rendering of the overhead view of proposed warehouses at the intersection of Route 322 and Locke Avenue. — Photo Courtesy of Dermody Properties

The towns of Woolwich, East Greenwich, Swedesboro and Logan are to see development in warehouse, commercial and roadway development areas in 2022 as construction sites operate through delays, supply chain issues and the pandemic.

On the corner of Route 322 and Locke Avenue in Woolwich, construction has begun to convert this crossing into a four-way, lighted intersection with turning lanes, similar to that of the Kings Highway and 322 intersection. This project broke ground in October 2021 and is dependent on the progress of Dermody Properties. The Dermody Property developers have agreed to the Locke Avenue rehabilitation as well as the construction of three warehouses to be built on three of the intersection’s four corners.

These three warehouses are set to be a part of the LogistiCenter at Woolwich. Dermody Properties had hoped to begin the 1,151,485-square-foot industrial park’s construction in the third quarter of 2021but has seen delays due to the pandemic, rising prices and supply chain discrepancies.

“As you know with COVID and supply chain, everything takes a while. As well as cost has been also increased,” Mayor Craig Frederick of Woolwich Township said.

The past year also saw the groundbreaking of the new water and sewer line in the Route 322 corridor of Woolwich, along the current road construction of Locke Avenue. This project comes with the hope of making this land economically viable for the pending construction of warehouses and any future development.

Currently, the sewer pipe rehabilitation is heading north on Kings Highway in Woolwich. According to the GCUA Design Concept Map, the line will continue down Kings Highway into Clarksboro where it will turn onto Shady Lane Boulevard (County Route 707) to County House Road and continue to a discharge point into the Edwards Run Interceptor prior to the GCUA Mantua Creek Pump Station.

The Nike missile base is another site that is being negotiated for warehouse construction. Located on the corner of Swedesboro Paulsboro Road and Gilchrist Drive, the proposed industrial warehouse would encompass 214,487 square feet if approved by the township’s Joint Land Use Board. Arbok Partners has been chosen as the site’s redeveloper, although no timeline for the project has been established as it is currently in the planning phase.

Woolwich has also seen delays regarding the construction of the new Zallie’s ShopRite at the intersection of Center Square and Auburn Roads. This is to be a part of the Weatherby Town Center project that has already seen the creation of the Inspira Imagining and Urgent Care Center at the same intersection. Zallie’s ShopRite hopes to break ground sometime in 2022 but no specific date has been set.

By 2021, three light-industrial warehouses were completed on the corner of Democrat and Swedesboro Roads in East Greenwich. Two of these warehouses began operation in 2021 and a fourth warehouse, totaling 575,000 square feet, is planned for construction in 2022 with the hope to break ground in the first quarter of the year.

“We do have, on the horizon, a handful more of warehouses that are coming,” Mayor Dale Archer of East Greenwich Township said. “They are not large warehouses, but they are significant where they are in our redevelopment zone.”

All East Greenwich warehouses fall under the township’s PILOT Program, or Payment in Lieu of Taxes, and allows for 95% of the tax rate to go directly to the township.

“We have been very fortunate in East Greenwich,” Archer said. “Over the past six years, we have not raised municipal tax at all.” He added that “East Greenwich Township has the second-lowest municipal tax in all of Gloucester County.”

“We will not be eliminating the backbone of our volunteers. Volunteers are still a huge part of our fire department. They are able to respond just as well, but we want to make sure that we have that response time during the daytime hours,” Archer said.

Plans are currently in progress to build a new firehouse on East Cohawkin Road, which hopes to see advancement in 2022.

In Swedesboro, a mixed commercial and residential project is in the negotiation phase. If successful, this would place commercial spaces along Kings Highway with residential lots extending behind this space onto 2nd Street. Although still in the early stages of development,

“We were hoping to have things finalized by the end of 2021, but it just didn’t happen yet,” Fromm said.  “But I believe we’re pretty close to coming to an agreement for all the legal issues and financial issues. And hopefully, that project will get going in 2022.”

Swedesboro also plans to continue its journey to eliminate its sewage treatment plant and combine its sewer line with that of the Gloucester County Utility Authority (GCUA) county sewer system. This will be done by the county constructing a pump station within Swedesboro and completing major pipe rehabilitation throughout the borough. The old station will be closed.

“We’re going to make sure 2022 is a better year than 2021 and do whatever we need to do to keep our people safe,” Fromm said. “And hopefully, to have a lot of progress that was stalled because of COVID pandemic.”

Logan Township is expected to see progress towards the construction of several warehouses in 2022, although none have official schedules at this time.

In November of 2021, Logan Township approved a long-time construction proposal on the corner of Stone Meeting House Road and Route 322. Here, Liberty Venture I L.P. is set to develop about 729,499 square feet of light industrial warehouses and office space dubbed the Commodore Business Center North.

Also in November, the Logan Township Planning Board granted final major subdivision approval to Triple Net Investments for the creation of three retail pad sites on a property located on Route 322 westbound near the Commodore Barry Bridge.

Annina Hogan, the Logan Township engineer, adds that while the timeline of the Logan North Industrial Park’s construction is established by its private contractors, the park is clear about making these additions one building at a time.

Also making way in 2022 are several parks and recreation additions to Woolwich. A new disc golf course is being developed in Tranquility Trail with the hope to be useable in the spring of 2022. Woolwich Township is also pursuing the creation of two fully lit, multipurpose fields and a half-size practice field at the Locke Avenue Park. Two softball fields, an additional public restroom and the expansion of the current walking path are also in the permit phase.

A ninja obstacle course at Thompson Family Park in East Greenwich is planned for construction in 2022 after the project was inspired by a young Jacob Myer from the Mount Royal area of East Greenwich. Myer has worked closely with the public works department to build this obstacle course that he inspired and requested in a letter to the mayor.

Several projects throughout Swedesboro have been on hold due to the effects of the pandemic. These include the refurbishment of the Racoon Creek boat ramp and the construction of a new 9/11 memorial, which both hope to resume during this year. The reconstruction of Leahy Avenue was delayed throughout 2021 but is hoping to see progress in the upcoming year as it currently lacks the sidewalks, curbs and updated traffic markings expected of such a frequently traveled road. The current reconstruction plan in place by the Swedesboro Borough Council would amend all of these factors at each of the avenue’s six intersections.