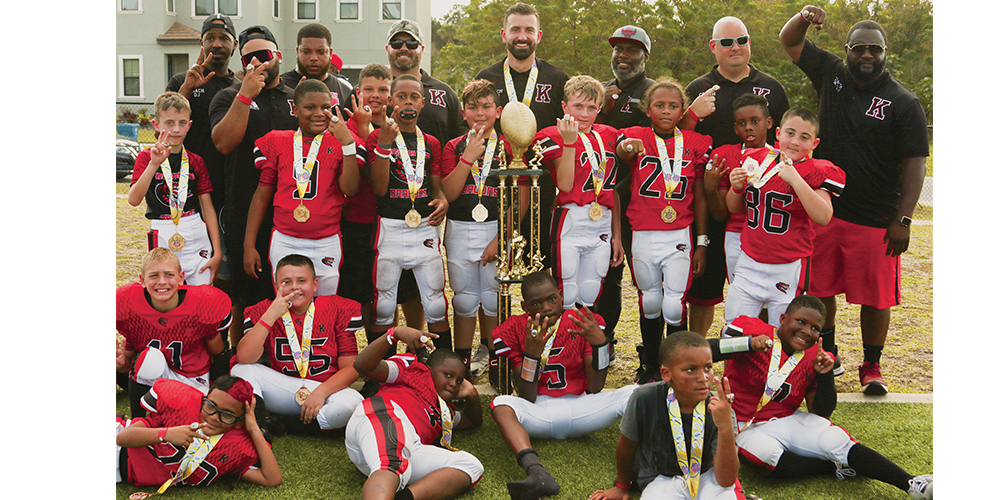 This is the Kingsway Youth Football Dragons 9U group’s second-consecutive AAU Championship win under Coach Jimmy Law. The team defeated the East Carolina Alpha Dawgs in Orlando, Florida, giving the Dragons a 2-0 record in the National Championship games.

“The love of the sport, the camaraderie, you will have this the rest of your life,” Archer said. “On top of it, one thing you will have that most kids don’t have is that you’re a champion.”

The Dragons achieved a 28-game win streak throughout the season and outscored their opponents 754 to 46, which was commemorated by declaring Feb. 8 “Kingsway 9U Football Championship Day.”

Each member of the team was also gifted a certificate commemorating their win and the proclamation, which was approved unanimously by the committee.

Following this, the committee voted to approve various resolutions, such as authorizing payment to the New Jersey Department of Transportation that covered road re-pavement in 2021, submitting an application for the State of New Jersey Safe and Secure Communities Grant that would go towards the East Greenwich Township Police Department, authorizing to refund overpaid property taxes for block 1703 and block 1701, allowing the police department to advertise for Class 1 Police Officer(s) and approving a resident food drive at Thompson Park.  The discussion of an ordinance regarding the development of parking and retention walls was tabled for discussion until the next committee meeting.

In new business, the committee saw the swearing-in of two new special law-enforcement officers, Payton Clements and Nicholas Cornette. Both men completed 20 weeks of training to graduate from the police academy and now join the ranks of the East Greenwich Police Department.

A full list of the resolutions passed can be found in the meeting minutes on the EastGreenwichNJ.com website, or by requesting a copy from the township’s Municipal Clerk’s Office during its regular office hours of 8:30 a.m. to 4:30 p.m. on Monday through Thursday and 9 a.m. to 4:30 p.m. on Fridays.