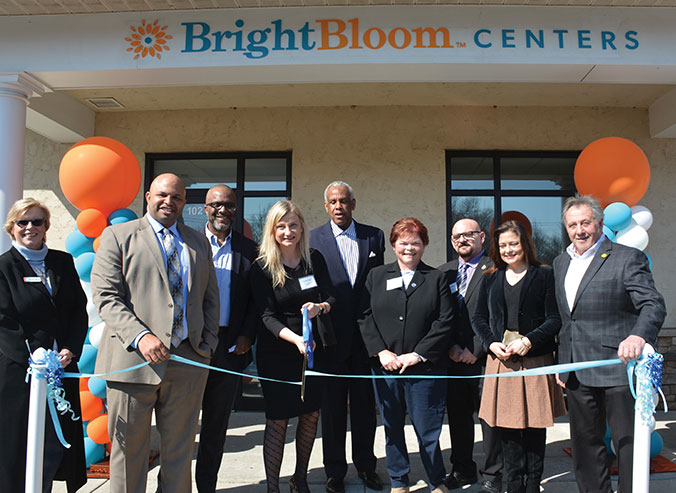 LOGAN TWP. — BrightBloom Centers, a leading provider of Applied Behavior Analysis (ABA) therapy for children with autism and special needs, celebrated its grand opening with a ribbon-cutting ceremony on March 2 at their new Logan Township location.

BrightBloom offers autism treatment in a safe and enriching environment for children that promotes independence, discovery, connection, learning, and fun. Partnering with families and schools, the compassionate team of licensed professionals uses ABA therapy to help children ages 1 to 12 reach their full learning potential. While the causes for autism are still unknown and there is no cure, multiple studies suggest that early diagnosis and intervention improve outcomes and increase the chances of an independent and fulfilling life.

Securing therapies for a special needs child is something co-founders Diliana and Marcus Henry know all about, having done that for many years to get help for their son Alex. At around 9 to 12 months, he began struggling with communication. He wasn’t responding to his name, making baby-talk, or saying his first words.

The Henrys connected with an early intervention program designed to enhance the development of infants and toddlers with disabilities or delays, but by 18 months, Alex was withdrawing even more. He would lie on the floor, disconnecting completely from his surroundings. It wasn’t until he was three years old that he finally received the diagnosis of autism spectrum disorder (ASD). By then, he was exhibiting severe behavioral challenges, like aggression and self-harm, that limited his socialization and learning.

Among the many mainstream and alternative interventions, parents and professionals in the field unanimously recommended ABA therapy. However, at the time, there weren’t any local center-based programs where Alex could get the intensive treatment he needed.

Undeterred, Diliana and Marcus decided to open an ABA center in their community of Wilmington, Del. The first location of what was then known as Brandywine Center for Autism opened its doors in the fall of 2014.  BrightBloom now operates four centers, with the newest Logan Township location opening in January 2022.

In December 2021, the CDC reported that 1 in 44 children in the U.S. is diagnosed with ASD, a 22% increase in prevalence from the year prior. ASD is a developmental disability that can cause a wide range of challenges in social interaction, communication, and behavior.

“Access to ABA programs continues to be a challenge for many families in southern New Jersey. While funding has improved in the last five years through public (Medicaid) and private sources, the number of qualified professionals in the field still does not meet the increasing demand,” said BrightBloom CEO Diliana Henry. “Our team is ready and invested in this community to help make a difference and fill the need for families by offering home-based and center-based ABA therapy, diagnostic services, early intervention treatment, and school-based programs.”