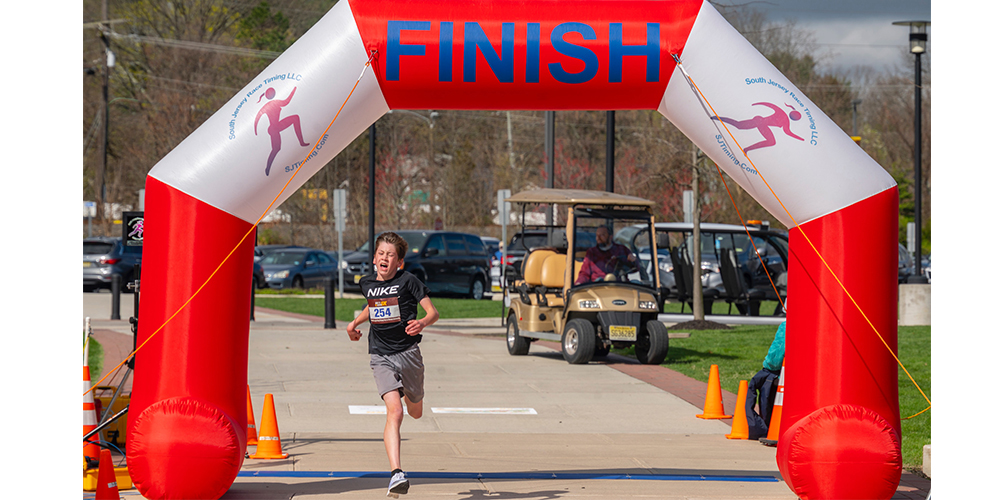 Although many strive, athletic greatness is out of each for most of us. Even for those with natural ability, it is often fleeting. For innate talent is rarely paired with a strong will and ceaseless dedication to one’s sport.

Not so in the case of Ryan Duffy. At only 13 years old, Ryan is winning national distance races and setting record times. As his initiative and discipline show no sign of waning, he can only get better.

(PICTURED ABOVE) Ryan crosses the finish line at the Rowan University Alumni 5K where he took first place.

The Swedesboro resident and Kingsway Regional Middle School seventh grader began running in 2015 through the Healthy Kids Running Series, a national, non-profit organization formed in 2009 to help combat childhood obesity and provide a fun atmosphere to build self-esteem. The organization sponsors a five-week running series and weekly races throughout the country.

Ryan now runs for Kingsway Middle School on both the cross country and track and field teams and runs independently in AAU (Amateur Athletic Union) and USATF (United States Association of Track and Field) races.

Ryan’s specialty is long-distance running, including 3k and 5k races. In track, he likes to run the 1,500 meter and mile distance races. According to Ryan, “The further the better!”

“I like the longer races because it gives me a great workout. I also feel like I get stronger the longer I run,” he added.

Ryan ran the Woodbury Relays on April 22, anchoring the Kingsway Middle School relay team who went on to win the Middle School Distance Medley. On April 23, he participated in the Sandy Sprint 5K in Philadelphia, benefiting Sandy Rollman Ovarian Cancer Foundation, and got second overall and first in his age group with a time of 16:48.

Although currently participating on the track and field team, Ryan is already looking ahead to next fall’s cross country season and plans to continue competing on a national level. Ryan’s list of accomplishments is extensive and incredibly impressive.

Some local accomplishments include being the overall winner of the Rowan University Alumni 5K this past April, the runner-up in the 2021 Kingsway Dragon Run, and winner of the inaugural 08085 8k when he was only nine years old.

“To date, his race at the AAU Indoor Nationals in Virginia Beach last month was the most excited I’ve ever been watching a race, in my thirty-two years in the sport. After some back and forth in the lead, Ryan passed his opponent right at the line to become the national champion in the 1,500 meters. The crowd in the arena went crazy!”

Although naturally gifted, these accomplishments have also come by commitment to his training and consistent competing. “I run approximately seven-ten hours per week. I also cross train for two hours per week. I usually compete in one race per week,” Ryan explained.

Ryan’s Dad, Andy Duffy, is his biggest supporter and advocate. “My dad puts together my training plan and runs with me. Together we come up with goals to work towards,” said Ryan.

Ryan is also fortunate to have incredibly supportive coaches on both his track and cross country teams. “The Kingsway coaches have helped me during cross country and track seasons and have been cheering me on! Running with this team is exciting and fun,” he said.

The praise goes both ways. Steven Ottinger has been a Kingsway Middle School Cross Country Coach for the past 10 years. “Ryan is every coach’s dream. He is dedicated to running and goes far above and beyond to ensure that he is making continual improvement—something that is hard to do when you are as naturally gifted as he is,” said the 33-year-old resident of Mullica Hill.

“On top of that, he is humble and never afraid to put in the extra work, including running additional mileage after a meet and on his own time to push himself further. Ryan has an extremely bright future ahead of him,” he added.

Coach Michelle Gray echoed Coach Ottinger’s sentiment. “Ryan is one of those people that just has that “it” factor. He is the ultimate all-around package. It’s very rare to find an athlete at his age that already has the mentality and drive to put in the extra work and want to do whatever it takes to reach that next level,” Gray began.

“He already understands that it’s the work you put in when nobody is watching that is the difference maker when it comes to being just good, or to being great,” said the 35-year-old middle school attendance secretary and resident of Mickleton who has coached many sports and students throughout the years.

“One thing that always sticks out with Ryan is that no matter how many miles we run in practice each day or how hard our meet was that day, he always stays after and logs a couple more miles on his own and with his dad. That extra work is what is going to make the difference moving forward. He may not think us coaches notice, but oh we notice,” Gray emphasized.

Cross country and track coach Tiffany Scurry pointed out that Ryan is not only an incredible athlete, but a great teammate and academic achiever.

Ryan also enjoys the camaraderie he gets from the school team atmosphere.

“My teammates are supportive and great to hang out with. We have fun together. Prior to joining Kingsway, I just ran with my dad. It’s great to make new friends now that I’m on the team.”

Scurry also credits Andy as another reason for Ryan’s success. “[Ryan’s] father, Andy, is an amazing coach and is certainly credited with helping him become the nationally ranked student-athlete he is today.”

The academic strengths mentioned by Coach Scurry are evident by another passion of Ryan’s, math. MathCounts is a national non-profit foundation that provides extra-curricular math programs to students in grades 6-8, and is offered as an after-school program at Kingsway.

When not running, Ryan enjoys instruction from his MathCounts Coach, Edward Heil. After winning the individual MathCounts, Ryan qualified for the State MathCounts Competition.

At such a young age, one wonders how Ryan is discipled enough to be successful at both sports and academics (he received straight A’s last marking period). When asked to give tips to other student athletes, Ryan offers wise advice.

“I make good use of my time in school to help balance schoolwork and sports. Other athletes should do their homework when they have time and not wait until the last second.”

In addition to running, Ryan cross trains by biking, swimming on the Peachwood swim team, and playing soccer on the Kingsway Premier year-round soccer travel team. He has also trained for and participated in a triathlon in Cincinnati, in which he brought home seventh place.

Along with physical training, Ryan prepares for races by studying the course and picturing the race in his head. He also eats healthy and gets a good night’s sleep.

When asked how he is able to always stay disciplined, Ryan advised other student athletes on what works for him. “Find a good coach, they can help you stay motivated and on task. My dad has helped me to do the same along with the coaches at Kingsway,” Ryan advised.

As an extremely successful 13-year-old, perhaps one of the most surprising and delightful things about Ryan is his warmth and likeability.

“Ryan is one of the most genuinely kind-hearted and nicest young men you will ever meet. Humble and hungry would be a great way to describe him. He’s going to be really fun to watch in the coming years, and I’m really looking forward to seeing him accomplish numerous great achievements in the very bright future he has ahead of him,” emphasized Coach Gray.

For those just starting out as a runner, Ryan offered additional advice. “Run consistently. Don’t give up right away. The more effort you put in the faster you will get,” he added.

What does the future hold for Ryan Duffy? “Honestly, the future is a long way off,” he answered. “I’m more focused on the short term and being the best I can be now.”