From Sorrow to Triumph: The Story of Youth Golfer Ryan Boudwin 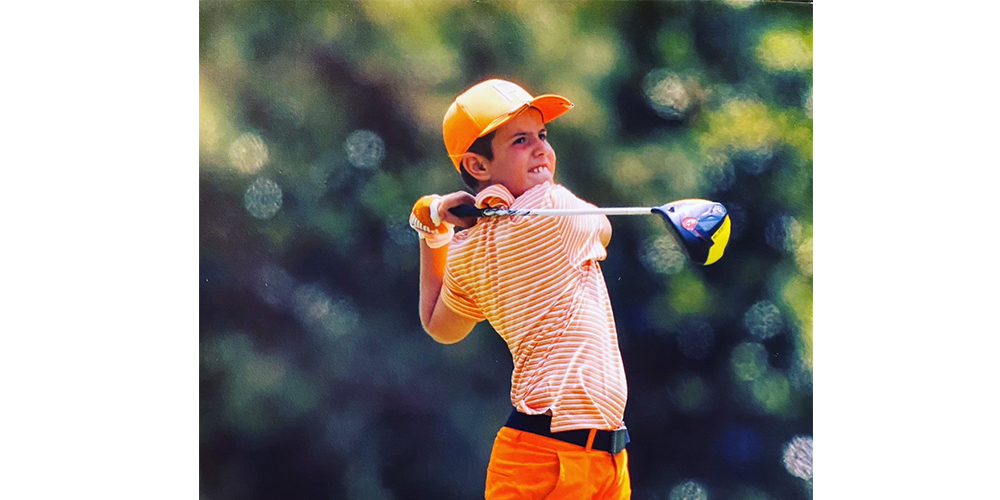 This is two stories. On the surface, it’s about a golf prodigy. Dig deeper, and you’ll find a foundational tale of perseverance, commitment, and an unbreakable will.

Ten-year-old Ryan Boudwin, a former resident of Woolwich Township, is indisputably a young athlete full of grit and rare talent.

Having only began playing golf in August of 2020, Ryan has already participated in approximately 100 youth matches and invitational tournaments, which he started in late 2020.

Just this past June, he recently placed first in the New Jersey State Championship, held in Hopewell, where he also set a state record with his 25 stroke-winning margin. Ryan shot 10 under par over 36 holes with scores of 70 and 64.

In May, Ryan also placed first in the Carolina’s State Championship, in Southern Pines, North Carolina, with a 14 under par. There, he set a national record with a seven-stroke winning margin over 36 holes with scores of 66 and 64.

Just this past August of 2022, Ryan competed in his first international tournament. The U.S. Kids Golf Foundation holds its annual World Championship in the Boudwin’s current hometown of Pinehurst, North Carolina.

“Every great golfer was there; no one misses USKG Worlds,” Ryan explained.

“I have never seen a field as strong as Worlds, every kid was extremely good, one stroke difference was like 10 spots difference in order of finish.”

While he struggled with his short putts during this competition, Ryan gained invaluable experience competing with other golfers from around the world, and has already qualified for next year’s World Championship.

An impressive résumé, especially for someone so young.  Perhaps an even more compelling tale is how Ryan and his family built this book of success from individual chapters of tragedy and misfortune.

As with many challenges in recent years, it began with COVID-19.

Ryan’s grandfather, a successful physician, died of the virus at the beginning of the pandemic, along with other family members.

This tragedy left the family grieving, and also fearful of exposure and the possibility of additional family members falling ill.  In addition, along with students everywhere, Ryan was subject to the academic and social challenges of long-term online distance learning.

Ryan was intensely involved with baseball when the pandemic began, and was playing for the Mid-Atlantic Warrior’s travel team, based in Woolwich Township.

“Because we were very scared since we lost several family members to COVID, I spent the summer and fall of 2020 sitting outside of the dugout, away from my team, by myself, to protect my family. I didn’t mind this, my coaches and teammates were very supportive but they were not as scared as we were.

“I didn’t feel safe doing indoor training that winter, and I was also starting to love golf, so we gave our notice that we would be leaving the team after the fall season ended,” he continued.

“We’re not scared anymore, and I’m just as in love with golf, so it wasn’t short term.”

Ryan credits his grandfather for his golf swing because he says he would not have discovered this talent if he had not gone through the loss of him to COVID, and the subsequent fear and isolation he and his family experienced.

Ryan’s father Dan supported his son’s new endeavor by turning the family’s three-car garage into a golf simulator studio and by taking Ryan to Town and Country Golf Links in Woodstown.

“Everyone was so nice to us there. I especially remember Mr. Fred and how nice he was to me every day at the range,” Ryan recalled.

Inspired by the movie The Short Game, which follows kid golfers through their journey to the World Championship in Pinehurst, North Carolina, Ryan’s family visited the Pinehurst Resort in December of 2020, then made the bold decision to pick up and move to the town at the end of January 2021.

Ryan had come to the right place. He explained how golf is a more common youth sport in North Carolina, and how accommodations were made to allow him to excel at both golf and as a baseball pitcher.

“Because my coaches know a lot about both sports, they coach and train me in a way that doesn’t mess either up. My baseball coaches don’t mess with my batting swing, they let me do what’s natural so that it doesn’t negatively impact my golf swing. I could hit the ball much harder and farther, but I am happy to be a consistent base hitter with a great golf swing.

“My coaches don’t mess with my pitching either, they let me do what’s natural in my throwing slot so that my dad doesn’t limit my full swing golf practice because I could get injured much easier pitching out of my slot. I also probably pitch about 60 percent so that I don’t injure myself. My coaches are happy with me giving up hits instead of trying to strike kids out and risking walks, it was the same in New Jersey but I was personally more interested in strikeouts,” he added.

Virtual school during the pandemic, thought of as a negative experience for most students, also worked in Ryan’s favor.

“In Woolwich I also got incredible support from the school and my teachers. I excelled in virtual class and received several awards. When we left for Pinehurst I continued virtual school in New Jersey until we decided to move for good. I literally attended New Jersey virtual school from a golf cart in Pinehurst. And I did great in school too!

“Had my teachers not permitted me to attend virtual class from a golf cart while I discovered my love of the game, I may never had discovered it,” he confirmed.

While many student athletes see grades suffer or academics take a back seat to their game, this is not the case with Ryan.

“I was a great student before picking up golf but went to a new level once I was motivated by golf. All I could think about was getting out on the golf course and playing, and I knew I had to do well in school for that privilege. Golf has certainly made me be a better, more motivated student.”

But in March 2022, after only having found a permanent house in Pinehurst, the family suffered another devastating loss. Fire consumed their home and the family pet, a puppy named Charlie.

Ryan explained what happened next.

“After the fire my parents thought golf was too emotional and wanted me to take a break from competing, which I did. The first big events I played well in after the fire were the state championships.”

The family rescued and adopted two puppies, Ace and Oreo, in honor of Charlie, and moved back to their original rental house situated along the Pinehurst golf course. Having immediate access to the course proved vital to the improvement of Charlie’s game.

“I spent lots of time on my short game and that’s what led to the super low scores. I was very fortunate that a Ladies Professional Golf Association pro, Nicole Weller, took me under her wing after the fire. My parents said that Coach Nicole knows a lot about psychology and golf and that she would be a big help, and she was.”

Weller, whose coaching encompasses both the physical and mental aspects of golf, talks about what it’s like to assist “Team Boudwin.”

“Ryan is a very mature 10-year old with a wonderful sparkle in his eyes and the best determined smile when a challenge is thrown down. I am honored to help guide him. He’s a bright star and I can’t wait to see what’s in store for him ahead!”

Unwavering devotion to one’s goals is rare at any age, but especially for a 10-year-old. Ryan revealed that his formula for success is both his love of the game plus a refusal to become addicted to video games, a trait he has witnessed in many of his peers.

“I have every video game and system, I can play as much as I want, I just choose not to. My dad says video games like Fortnight are addictive so I’ve never tried it. I realized my dad was right when I went over a friend’s house to play outside and all they did was play Fortnight inside while I sat there. Once they were done playing it they’d watch videos on YouTube of other people playing. I thought this was weird.

“I feel like I’ve understood addiction since I was eight because of Fortnight. I don’t want to ever play video games all day long, I just like playing sports video games with my friends occasionally,” he added.

Dan explains how Ryan’s attention to minute detail also contributes to his success.

“He’ll hit a part of the fairway based on which direction the grass is growing so he can get an extra 10 yards. He’ll definitely look at a green to see the grain (grass growing direction) before hitting onto it and even more when putting, where it’s critical at his level,” he began.

“He plays so much and to such a fine degree that he needs new wedges every couple of months as the groves that help spin the ball become less sharp and it’s an illegal modification to sharpen them yourself.

“To me a golf iron is something that never wears out, to him it’s a matter of knowing and counting on the exact needed spin rate for any given situation. Those little things are how he gets under par,” Dan summarized.

Dan also hopes that Ryan will inspire other kids to pick up golf clubs and join the game, regardless of their circumstances.

“Most of our friends, most parents, are under the impression that golf is an elite sport for those with lots of money, but this couldn’t be further from the truth,” he began. “Golf is on par with travel baseball costs unless you go outside of your region and incur travel expenses.”

“Golf events are a family affair for us. Ryan’s siblings Chase and Madison and his mom Erin and I go to almost every event that’s drivable, cheer Ryan on, and support him after it’s over. We win or lose as a family.”