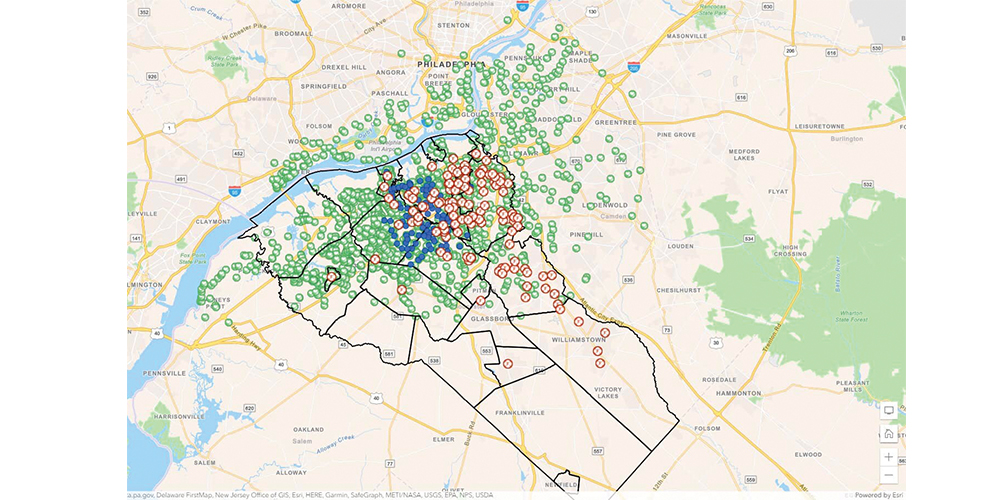 EAST GREENWICH — At 3:07 p.m. on Aug. 10, a gas, Lubrizol-1389 (Zinc alkyldithiophosphate), which causes a foul, rotten egg smell, began to slowly release from a tanker truck owned by TransChem USA while parked at TA Truck Service located on Berkley Road in East Greenwich. This odor quickly spread throughout East Greenwich Township and eventually north of the area to as far away as Philadelphia.

The gas was reportedly released to prevent a high-pressure build-up of the gas from occurring within the tanker, which could have led to an extreme reaction and possible combustion. The odor in question was a combination of hydrogen sulfide and mercaptans that can typically be found in natural gases and various steps of industrialization.

Both of these colorless gases carry an odor that can be detected by the human nose at .1 parts per billion, which would be less than a single drop of water in a tanker truck meant to haul gasoline.

Complaints of the odor by East Greenwich residents sprang up everywhere.

Calls flooded the 911 Emergency phone number. In response to the overwhelming number of calls received, two mass calls went out to land lines, telling residents that the county was aware of the situation and to stop calling 911 unless there was an emergency.

A Shelter in Place Order was given to East Greenwich residents. The smell lasted for days. Residents complained that it was in their homes due to their air conditioning, in their clothes, and cars, and there were concerns raised about the toxicity and long-term effects of the gas.

On Aug. 16, East Greenwich held a town hall meeting to address residents’ concerns and introduce representatives from various companies involved in the incident and its subsequent clean-up.

“We do not exactly know how this [chemical reaction] happened,” Dave Edwinsom, the TranChem representative present at the town hall meeting, said. “We’re still investigating that part. We have some theories. One of those is that the product got overheated.”

Although the source of the incident is still unclear, CTEH, a science-based environmental consulting firm hired by TransChem, assured East Greenwich residents that the dosage of gas present in the air was non-lethal and has been found to have no long-term effects at the present dosage that was detected even in the air closest to the tanker truck at .1 parts per million.

“When we interpret scientific literature, we assume that we are talking about the elderly and the sensitive sub-population,” Dr. Michael Reilly, a CTEH toxicologist, said while addressing questions about resident safety. “When I say we’re safe, I am not saying ‘healthy worker safe.’ I am saying the elderly, sensitive sub-populations are safe. We don’t make recommendations that apply to healthy individuals and not others, we make recommendations to those that are the most sensitive in the community.”

Reilly and fellow CTEH toxicologist Dr. Scott Malm both arrived in East Greenwich on Aug. 10 to begin their air monitoring and observation of the tanker. According to Reilly, this is the third incident of this specific nature that he has been to during this year alone.

Reilly and Malm agree that while the gasses are considered harmless, residents may have felt ill or had a headache while the smell was most pungent. The toxicologists compare these reactions to that of smelling someone who wears too much perfume. It is an irritant, but there are still no long-term effects that can be derived from the smell alone, and at such a low dosage in the air.

“A perimeter was established 100 yards from the vessel. No detectable reads were found outside of these 100 yards,” East Greenwich Police Chief Matthew Brenner said while discussing the force’s initial response. “And that is from the time of the incident to the minute that we stand here now.”

Still, residents remain concerned, feeling that so many questions are still unanswered.

“You can smell it. The gas is all over her purse,” Frank Singley, who lives mere blocks away from where the vessel was parked at TA Truck Service, said in reference to his wife’s bag which she had brought from home to emphasize how strong the odor is in their house. “It’s all over everything and nobody is addressing where do we go from here?”

TransChem has set up an insurance claims hotline for all residents that can be reached from 8 a.m. to 8 p.m. on the weekdays and 8 a.m. to 4 p.m. on weekends. They can be reached at 855-476-7817. However, this hotline is not enough at the moment to quell the worries of several residents.

While this meeting answered many residents’ questions, many feel that they have still been left in the dark. For those still seeking information, CTEH’s toxicologists can be reached at 856-807-5388 during the same hours as the insurance claims hotlines.

Additionally, experts stress that fruits and vegetables grown outdoors in the East Greenwich area are perfectly safe for consumption.

“What do I do? What about my pets? What about my family, my home, my car?” Chief Brenner said, addressing the nearly full capacity of the East Greenwich town hall meeting. “I share the same concerns with you. I live in this township. I care about the people here and I have a family here. So certainly, your concerns are ones that are in my mind too.”