This is what sports and community are all about 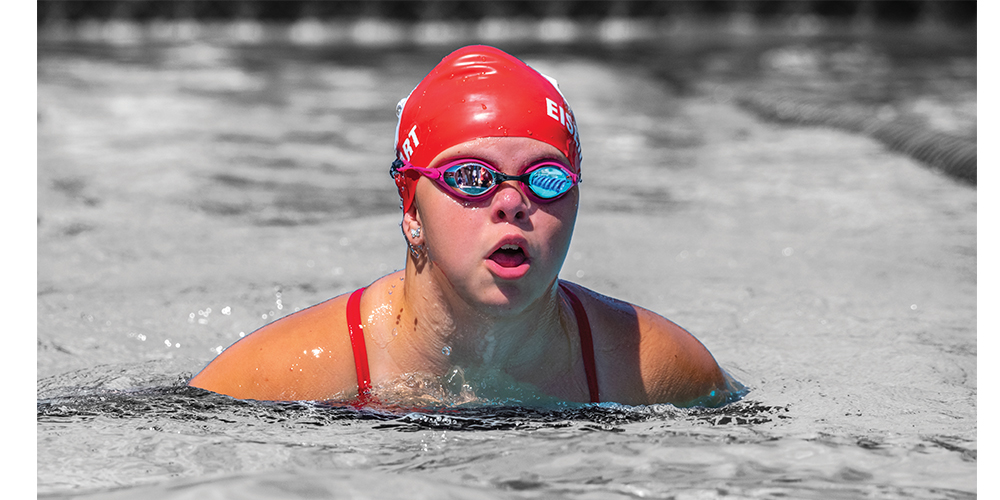 One can witness these words in action on any summer day you walk into the Peachwood Swim Club during swim team practice. The kids on the team are not only teammates but friends and each other’s biggest supporters.

Whether they are cheering each other on, in the pool helping out with the younger swimmers, or playing gaga ball, the swimmers on the Peachwood Swim team always seem to bring the best out in each other as well as those around them.

One swimmer in particular who has touched the hearts of so many on the Peachwood Swim Team, as well as so many of our neighboring swim teams, is Layla Eisenhart. Layla is 14 year old swimmer who just so happens to have Down syndrome. Down syndrome is a genetic condition in which a person is born with an extra chromosome.

Layla is one of six children in her family, and they each swim for Peachwood. She swims in both individual events as well as relay team events.

She is no different than any other swimmer on the swim team and that is exactly how every swimmer treats her. They cheer for her, they make signs for her, and they all love to see her bright smile while she swims, even the opposing side cheers for her.

Layla truly brings out the very best in everyone. She reminds us that sports are about so much more than winning. It is about cheering each other on. It’s about including each other, and it’s about treating each other with kindness and respect.

Most recently, Layla brought tears to the eyes of so many when she swam in the Peach Bowl, an annual Gloucester County swim championship for the area’s nine local summer clubs. Layla was the very first swimmer to participate in the event with a disability.

Layla swam in three events at the meet, two relays and the 100-yard freestyle. Peachwood Pirates’ Head Coach Kevin Nolan stated, “Everyone was cheering and that’s what it’s all about.”

Teams are only allowed to enter one swimmer or relay per event, so the amount of swimmers for each club is limited. However, Coach Nolan knew it was important for Layla to experience being there and swim in such an exciting championship.

Nolan stated, “It was loud. The loudest it was all meet. All teams and coaches were up and cheering”. Coach Nolan also shared that anytime Layla does anything, the entire team gets behind her and she always has a smile on her face.

Layla’s mom, Traci Eisenhart, said, “To find people who stop what they are doing, the teams, the coaches, and the parents encourage her. We don’t experience that in any other sport. To see everybody just cheer for her and accept that she’s there and want her to be there, it’s different than anything else. It’s amazing and a very humbling experience.”

As another swim team season comes to a close, and competitive sports are as competitive as ever, it is our children who remind us what life is truly all about. It’s not about the wins or who is the best, it’s about being kind and loving human beings who support and encourage each other.

And every once in a while, if you are really lucky, you will have the privilege of having a Layla Eisenhart on your team to remind you of that and bring the absolute best out in everyone around.