Are you hearing scary noises at night? Maybe it’s the Jersey Devil 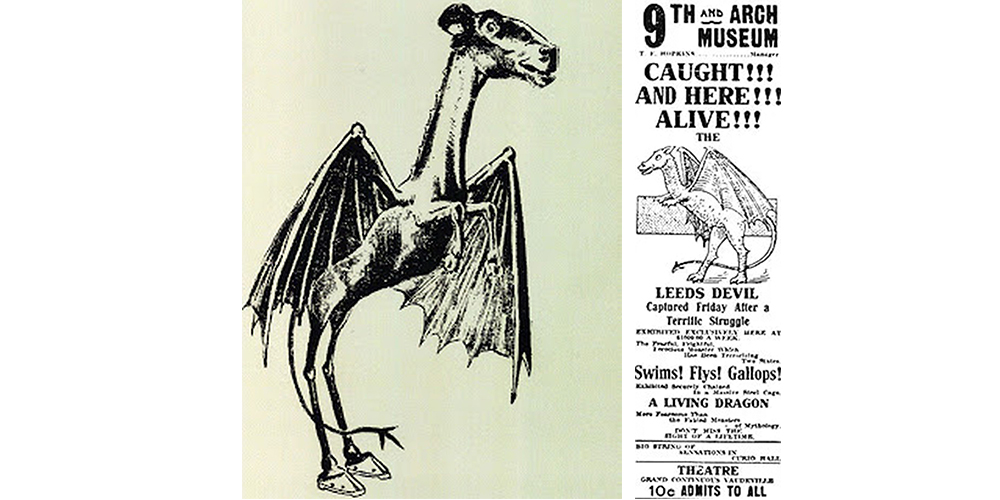 It’s October. Time for scary movies and spooky stories. Here’s a scary one for you with a local twist.

Have you heard the one about the kangaroo-like creature with the face of a horse, the head of a dog, wings of a bat, horns, and a tail that was seen flying around South Jersey including Swedesboro and Woolwich? I’m talking about the Jersey Devil.

Stories of Jersey Devil sightings are legendary and are still happening today so maybe that screeching, screaming sound you hear in the woods could be him.

I was told about the Jersey Devil while listening to stories being told around a campfire at night during a girl scout camping trip at Camp Sacajawea in Newfield, right next door to the Pine Barrens, and the creepiness and fascination with the Jersey Devil has stayed with me ever since.

Legend has it that the Jersey Devil was the thirteenth child of a woman named Jane Leeds who lived in the Pine Barrens. When Leeds found out she was pregnant with this thirteenth child, she cursed it. It was born a human baby, but quickly transformed into a creature with a horse face, dog head, bat wings, horns, and a tail. The creature attacked everyone in the room and flew up the chimney into the night and has since been living in the Pine Barrens.

The Jersey Devil or Leeds Devil as it is also known, has been heard by many in the Pine Barrens to this day. Its screams still pierce the night.

In 1778, the Jersey Devil was reported to have been seen and shot with a cannonball through the wing by famed war hero Commodore Stephen Decatur on a trip to Hanover Iron Works (located in the Pine Barrens) while traveling to test cannon balls. The monster was not harmed by the cannon ball.

In 1820, the elder brother of Napoleon Bonaparte, Joseph Bonaparte, reportedly came upon the creature while hunting on his property in Bordentown.

In January 1909 there were a rash of sightings in the Gloucester, Camden, and Salem County areas as well as Philadelphia. The newspapers sensationalized them, and a kind of mass hysteria ensued.

The reports started on Jan. 18 when strange unexplainable animal footprints were found in Burlington County. On Jan. 19 the Jersey Devil was spotted outside a window in Trenton. The people reportedly watched the creature on a rooftop for several minutes.

On Jan. 21 the Jersey Devil was said to have attacked a trolley in Haddon Heights and was chased off. It also reportedly attacked a social club in Camden.

On Jan. 22, the last day of the sightings, a pet owner in Camden reportedly beat off the creature as it was eating her dog. The creature was even seen in Philadelphia where police were said to have fired on it.

During this time, there were reports of livestock being killed, and of sightings of a creature flying into electrical wires and being unfazed.

According to newspaper accounts of the time, he and or his tracks were seen in Salem, Woodstown, Camden, Woodbury, and yes, even in Swedesboro and rural Woolwich Township.

A man in Bridgeport and another in Paulsboro also reported sightings.

The Jersey Devil hasn’t been seen since then. Or has he?

In 1951, he was spotted in Gibbstown by a group of boys while in the woods.

And that’s not all. From an article written by Shannon Quinn which can be found at https://historycollection.com/16-creepy-alleged-sightings-of-the-jersey-devil/7/ there have been several more recent sightings.

In 1972, a massive Jersey Devil crossed Greentree Road. A woman named Mary Ritzer Christianson was leaving Blackwood and heading to Glassboro on Greentree Road when she saw a creature in her rearview mirror that was crossing the street. The creature had the head of a horse, and woolly haunches, like a goat, but stood upright like a man, and had a set of leathery wings, Quinn wrote.

In 1980, the Wharton State Chief Forest Ranger Alan MacFarlane was called out to a South Jersey farm near the Wharton State Forest where the entire pack of the farmer’s pigs had been brutally slaughtered in the middle of the night. The back of each pig’s head had been eaten, as if something perched on their backs and ate their brains, Quinn wrote. Their backs were scratched, but whatever killed the pigs left the rest of the body alone and moved on to the next animal in the pack.

In 1993, a forest ranger named John Irwin was inspecting the Mullica River, which runs through the New Jersey Pine Barrens. He was driving when he had to stop his car because there was a huge animal in the middle of the road. He described it as having thick, black, matted fur, but it also had horns, like the devil. It stood over six feet tall, Quinn wrote. The creature went back into the forest.

In 2009 someone claimed that they had seen Jersey Devil while driving towards Woodstown during night. Thinking it was a deer, they slammed on the brakes. The creature then flew away into the woods.

In 2015, people claimed that they thought they saw The Jersey Devil along Route 9 in Egg Harbor Township near a golf course. The witness, David Black, thought that there was a llama standing inside of its fence along the roadway until it whipped out gigantic wings and started flying away.

Black grabbed his cell phone and tried to capture a video of this creature. The video clip was short and shows what appears to be the Jersey Devil flying across the screen, a poorly focused black silhouette. This video and still shot from it were shown on local news stations in the Philadelphia area. https://abcnews.go.com/US/man-claims-photographed-mythical-jersey-devil-legend-dating/story?id=34442356

There could be many explanations for the recent sightings such as bears and even the use of computer enhancing of images. Most 1900’s era newspapers loved to sensationalize news stories so that may be an explanation. This may have caused a mass hysteria that led to the multiple sightings since the Jersey Devil was even spotting in Delaware at that time.

Another theory involves Benjamin Franklin, the Quakers, jealous competition, and the almanac. Daniel Leeds and Benjamin Franklin had rival almanacs. According to Wikipedia, Leeds was a Quaker who was ostracized by his congregation after his 1687 publication of almanacs containing astrological symbols and writings which they considered pagan.

During 1716, Daniel Leeds’s son, Titan Leeds, inherited his father’s almanac business. He continued to use astrological content and eventually competed with Benjamin Franklin’s popular Poor Richard’s Almanack. In 1728, Leeds began including their family crest in his publication, a wyvern, a bat-winged dragon-like legendary creature with clawed feet.

Franklin at one point wrote that his competitor had died and was resurrected and writing his almanac from the grave. So, you can see how this theory of how the legend began makes sense.

Which theory do you believe? Curse, panic, or gossip?

There are a lot of unexplained things in this world. And when you’re outside at night and you hear an unworldly scream in the dark, (and who hasn’t?) do you have an answer?

It’s October, so the answer that comes to mind can only be the Jersey Devil.