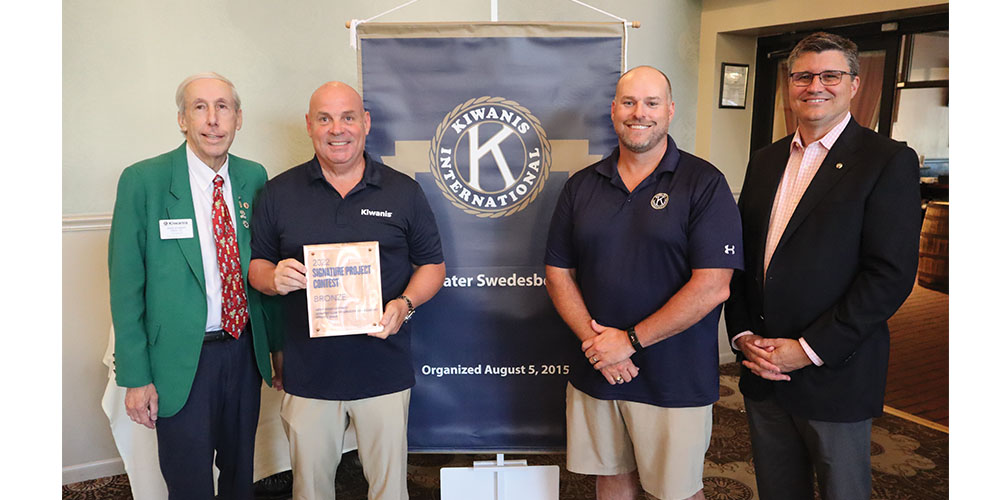 SWEDESBORO — The Kiwanis of Greater Swedesboro were named as the winners of the International Bronze Award for Signature Project for their 5th Annual 08085 Run/Walk/Sit event held in June. According to Kiwanis of Greater Swedesboro President Marty Caparros, this is the first time a club in New Jersey has won in the Kiwanis history. “Almost always the winners are located in Europe or Asia,” he stated.

The club also received a Distinguished Service Award. The awards were presented by the Kiwanis State Governor, Dean Konner at a banquet.

Kiwanis of Greater Swedesboro runs the annual 08085 Run/Walk/Sit which had over 150 runners, over 50 volunteers, and raised thousands of dollars for the community. In the fall they will hold their second annual golf fundraiser.

“Kiwanis of Greater Swedesboro is the star club throughout the state of New Jersey in pretty much every single category that is tracked and measured’” stated Caparros. “We support our entire community with the focus on kid and families in need, but we support the police, fire company, veterans, the local schools, local restaurants, food panties, clothing shelters, the boy scouts, the girl scouts, and more.”

According to Caparros, in the past couple of years, the club here has grown from just a few members to now over 30 members of all ages, sexes, and backgrounds. The Kiwanis meet the second Thursday of every month at 6:30 p.m. Caparros stated that the meeting only takes about an hour and usually includes dinner. The club pays for the guest’s dinner their first time at a meeting. Meeting locations vary between local businesses to give local community support.

The Kiwanis is an international organization that has been in existence for over 100 years, representing 80 countries around the world. If you would like to become a member of the Kiwanis of Greater Swedesboro, call Caparros at 609-970-7870, email Marty7906@gmail.com or visit https://kiwanisofgreaterswedesboro.org.