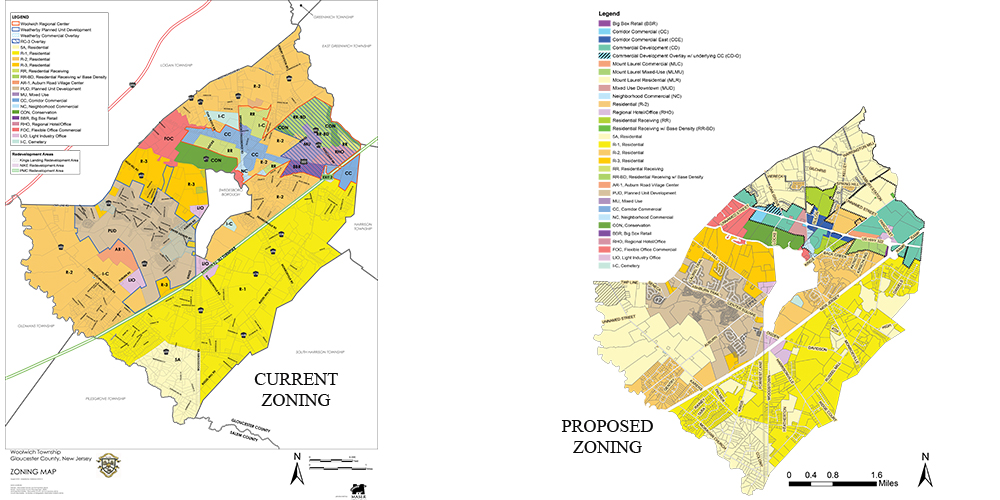 WOOLWICH TWP. — Woolwich Township is in the process of approving a new Master Plan for the township zoning. Major changes in zoning will take place along Route 322 and on Oldmans Creek Road.

The major change will come in the Oldmans Creek/Auburn Road area where a developer has applied to the township to construct the Oldmans Industrial Park at 1314 and 1366 Auburn Road. The location of the proposed industrial park is adjacent to the Gen. Harker Elementary School on Oldmans Creek Road and residential homes.

Part of the site is currently the location of US Drop Forge, a closed die forging facility which opened in 1968. Closed die is the type of forging done at the facility. The facility is still in operation.

Parents, residents, and teachers are protesting the construction of such a facility so close to the school stating that it would be a danger with the increased truck traffic and fumes, creating safety issues for the children in outdoor activities.

With the proposed Master Plan changes, this area would be changed to a residential zoning. The proposed master plan would also eliminate zoning for an Auburn Road Village Center which was located on the western side of Auburn Road. This would also be rezoned residential.

However, according to Woolwich Township Mayor Craig Frederick, because the application for the warehouse complex was submitted before approval of the new Master Plan, the property’s zoning requirements would follow the Master Plan at the time of their submission.

According to Frederick, the warehouse project is not asking for any variances.

Frederick said that these Master Plan changes are predominantly focused on the elimination of the TDR program that has been in place since 2008. The TDR (Transfer of Development Rights) Program was set up to help preserve open ground.

In the TDR Program, certain designated areas of the township were planned to remain less developed and were considered sending zones. Where township planners wanted housing to be was considered the receiving zone.

Property owners in the sending zones could sell the rights to develop as many houses as their acreage was zoned for to the township. That ground would then be preserved because houses could no longer be built there.

These extra housing credits were then sold to developers to add additional houses to their developments in the designated receiving zones.

Township officials have deemed this program unsustainable and no longer effective and are now trying to preserve ground in other ways. One way according to Frederick is changing the sending area zoning to 5A-Residential to encourage cluster housing.

As the name suggests, cluster zoning is meant to cluster homes together on a certain agreed upon percentage of the acreage in a development. The balance of the acreage would be kept open.

Frederick said, in short, the Committee is looking to continue preserving land, encourage farming, while at the same time allowing landowners options to sell their property.

Timeline for the Master Plan adoption, according to Frederick is by the end of the first quarter of 2023. The committee is currently taking the feedback provided from the October JLUB meeting, including resident feedback, he added.

The Kings Landing Redevelopment Plan is a zoning plan for property along Route 322 in Woolwich Township. This plan which was approved on second reading on Dec. 19, is also undergoing some zoning changes.

The new plan has added a CC (Corridor Commercial)-Overlay on property along Route 322 and Oak Grove Road to the west. This would allow commercial, office, light industry as well as warehouses.

Property on Route 322 near the railroad tracks on the south side beyond Wawa was changed to Corridor Commercial East (CC-E) which is for commercial and office locations. Warehouse are prohibited. This would now match the zoning across the street. This was changed from Commercial Development (CD) which allowed warehouses and fulfillment centers,

The CC-E zoning will be from the Wawa to beyond Kings Highway on the southern side. It was originally zoned for warehouses from the railroad to near Garwin Road. On the northern side, it would run from Route 322 and Paulsboro Road to Garwin Road.

From Kings Highway to near the turnpike on the south side will be zoned CC-E, as well as Mixed Use (residential units, commercial and retail uses) and Big Box Retail. Warehouse zoning will begin near the turnpike exit and beyond until the Harrison Township boundary.