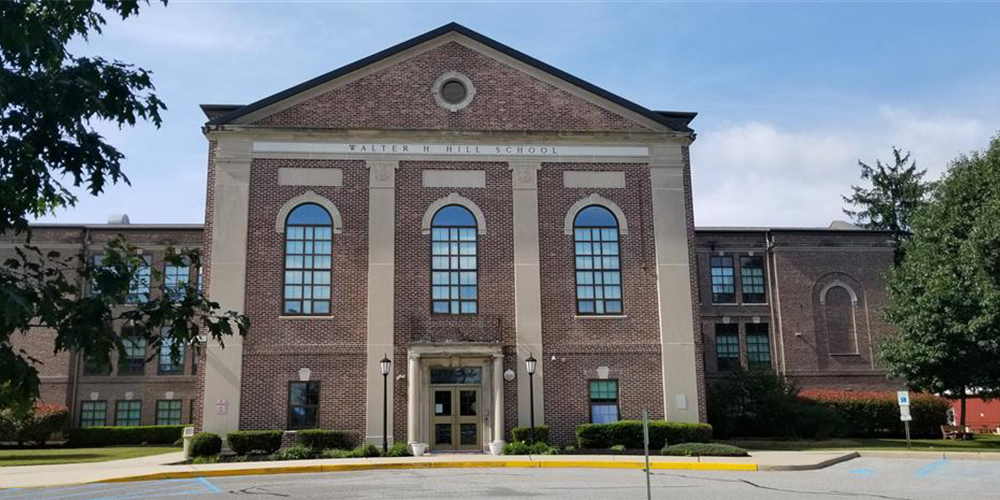 The 2022-2023 school year marks the centennial of Swedesboro’s Walter Hill School, and preparations for this exciting milestone have already begun.

The school, located on Kings Highway, is now home to all sixth-graders residing in Swedesboro and Woolwich Township.

The Walter High School first opened in 1922 as Swedesboro High School, and its first class graduated in 1923. It remained a high school for 40 years until Kingsway Regional High School opened in 1963.

When it began no longer serving as a high school, it was renamed after the beloved Principal Walter “Skipper” Hill, who served from 1927-1963.

Teacher, students, staff, and community members have been invited to participate in the creation of a permanent art display to celebrate the anniversary of the beloved educational institution. A mosaic mural is being created as a permanent installation along a heavily travelled interior school hallway, to be composed of individually designed tiles.

“Paint nights” were held in November and December to create the tiles, with another to be held in January. To participate in the January paint night, register online at https://www.swedesboro-woolwich.com/Domain/72. You can also submit individual written memories or photos as part of the school’s legacy project via the website.

Sometime during the spring of 2023, the mosaic will be unveiled during a community-wide centennial celebration.

Dr. Wally Kappeler, Superintendent of the Woolwich-Swedesboro School District, explained that the school will partner with the Swedesboro Historical Society to celebrate the centennial. Along with the unveiling of the mosaics, the event will feature student performances and an array of school memorabilia from the last century.

Kappeler explained why the event and the milestone itself is important to not only the school, but the community-at-large.

“It stems back to my life philosophy,” he began. “We are not celebrating a building, but celebrating 100 years of students who are uniquely and wonderfully made with a purpose. Each child has a significant role to play and a unique contribution to make and we want to embrace, equip, and empower them to make a difference.”

Kappeler encourages all community members to recognize and celebrate the milestone. “Education is not just about what happens in our school, but it’s a community effort,” he stressed.

Woolwich Township resident Gina Azzari has been president of the Swedesboro-Woolwich School Board for the past two years, and a board member for the past four years. Azzari was a teacher in the Swedesboro-Woolwich School District for 18 years, and started teaching at the Walter Hill school right out of college. She spent the majority of her teaching career at the school and has many fond memories of her time there.

“Fifteen of my 18 years in Swedesboro-Woolwich were spent teaching in the Walter Hill building. I love that school. It is filled with history, stories of friendships, educational triumphs, laughter, and love. Every time I walk through its doors, I feel like I’ve come back home,” she shared.

Azzari explained that her fondest memories of Walter Hill School are centered around the students she taught.

“I remember staff versus students softball, kickball, and basketball games, baking treats for my students, sharing a great piece of literature with them, and teaching my 6th graders to love social studies by bringing it alive in the classroom (you could often find me acting like an early human/hominid, talking in different accents to get the students engaged and interested in learning more, or doing hands-on activities that the students loved and still mention to me when I see them around town). Laughter was always present in my classroom as I wanted to make learning fun for my students.”

Azzari also shares Kappeler’s view that the anniversary is a milestone for the entire community to recognize. “Anything that reaches a 100-year mark is special. But when you think about the fact that our country is 246 years old, that feels impressive,” she began.

“Education is an integral part of every town, the heart of the community. It is where children grow and learn, where we celebrate milestones in our children’s lives, celebrate holidays, gather for sporting events and theater productions, attend political events, or hold meetings.

Azzari explained that former students and staff, especially those from when the building was Swedesboro High School, have seen the most change over the years. “Their insights and stories are steeped in the rich history of our district,” she began.

“I recently attended the Swedesboro High School reunion to help spread the word and get them involved with our 100th year celebration. I enjoyed listening to many of them reminisce about the days they cherished from high school. The spirit of those memories lives in the halls of the old Swedesboro High School building [Walter Hill] and deserves to be celebrated,” she emphasized.

Cancila is a first-year teacher and member of the Walter Hill 100th year committee, for which she was excited to volunteer.

Cancila talked about her role as both a student and an educator in the district. “My mom (my biggest role model) Silvia Cancila has taught in the district for 20 plus years, and I am lucky enough to say that I am now working alongside her,” she began.

“It is such an awesome feeling getting to make a difference in the same town I was raised in and continue to reside in.

“Walter Hill was my favorite school I attended in the Swedesboro-Woolwich School District back in 2012, 10 years from my start as a teacher in the district.

“This 100th year is so special to me and I know our small-town community as well. I can’t wait to celebrate the 100th year of Hill all school year long,” she added.

Current Walter Hill students voiced the importance of the anniversary in different ways.

Luke Gilliland resides in Woolwich Township, and provided his unique insight about the school’s history.

“This nation has gone through tons of events in 100 years. It is insane to think that most people that came to this school have sadly passed away and it makes walking down the halls of the school very interesting seeing that it was most likely walked by a kid the exact same age as you in the exact same class as you,” he added.

Aksayan Umashanger lives in Woolwich Township, and noted how educational resources and simple things like clothing have changed over the past century.

“School back in the twenties was much different than things now. In 1922, there weren’t any digital devices like cell phones or laptops. Instead, they used machines like telegrams and typewriters. Imagining how hard it was for them to learn and study is very important, as they were not able to use Promethean boards and Chromebooks like we are able to now. Dress code was also very different. Back in the day, the girls had to wear dresses and hats, and the boys had to wear suits,” she observed.

The anniversary has helped another student, Woolwich resident Nia Alteros, reflect on the passage of time.

“I have two older brothers and one came here when he was in 6th grade and that was only five years ago. Five years ago seems like a long time, but if you think about it, it really isn’t. Just thinking about how there were 100 generations before my grade just makes me think and question for a bit.”

Woolwich resident Ethan Kiner  noted that attending a school celebrating its 100th anniversary is something for a student to be excited about.

“Being able to meet other students attending the same school during its 100th year is quite thrilling. It is also exciting being in a school that is a century old. Attending a school during an immense milestone is genuinely an exciting experience.

Another student and Woolwich resident Scarlett Redkoles wishes her time at Walter Hill could be longer.

“If I had the choice to, I would stay here for years. In this school I feel heard, understood, and seen as an equal. The Walter Hill school is truly such a special place.”

Redkoles also shared some of the additional activities that students have been participating in to mark the centennial, including decade themes and other activities.

“One way we also celebrate is by dressing up for different themes and doing fun activities such as spirit week, class parties, and a bunch more!”

As the celebrations ramp up over the course of this school year, Umashanger has advice that the community should take note of.

“For 100 years, the Walter Hill School has shown appreciation to all of the many students, maybe it’s time to show appreciation back to the school.”