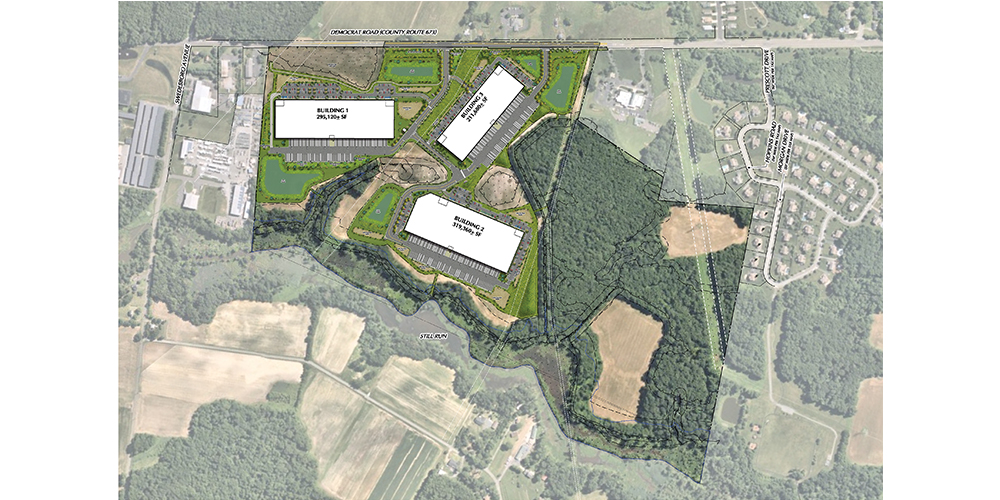 EAST GREENWICH – Republican Way is now on the official list of East Greenwich streets. This will be the location of three newly approved warehouses, just off Democrat Road.

At the Oct. 11 East Greenwich Committee meeting, approval was given for three warehouses to be built along Democrat Road. Afterwards, East Greenwich Mayor Dale Archer solidified the name of the entrance road by which these warehouses will be accessed, naming it Republican Way.

New roads within East Greenwich Township are typically named after veterans from within the community. However, Archer notes that all the township’s veterans are currently represented. Because of this, Archer took a slightly different approach in naming this road.

According to the most recent plans for these warehouses, they are set to total roughly 900,000 square feet of operation space within this parcel of industrial-zoned land. This space will be owned and operated by Duke Realty Corporation who then plans to further rent this space.

The site is located on Democrat Road near Swedesboro Avenue.

As the mayor has stated previously, the construction of new warehouses within East Greenwich serves to help bolster the communities PILOT program, or payment in lieu of taxes, which has allowed for East Greenwich to refrain from raising municipal taxes for the past seven years.

PILOT programs such as this are significant to municipalities such as East Greenwich because they provide increased income for the township that contributes toward municipal budgets.

In the case of East Greenwich, PILOTS are cited by Archer as the primary reason why East Greenwich has not had to raise taxes in seven years.

Although the details of the PILOT program for these warehouses have not yet been confirmed, other properties in East Greenwich, specifically the mixed-use development in Berkley Square, initially pay 10 percent of what its tax costs would traditionally be during the first year.

This percentage then increases by 10 percent each year until an agreed-upon percentage is met which is 50 percent in the case of Berkley Square’s retail and commercial lots.

This percentage is sustained until the end of the property’s PILOT program agreement which can last no more than 30 years for each property.

Agreements such as these allow for the township to retain 95 percent of the properties’ payments, rather than the significantly smaller percentage they would receive from taxes, and thus generates higher revenue and bolster East Greenwich’s surplus.

Other announcements made in the duration of this very brief meeting included the choice to consolidate some of the small debt that East Greenwich has accumulated over the past years into one larger bond that can be called in 2030. Prior to this consolidation, much of the smaller debt accumulated by East Greenwich could have been called in 2027, but this reconsolidation will extend the payment time for the township.

According to Archer, East Greenwich retained roughly $23 million in debt just 10 years ago. Now, the municipality hopes that they are close to completely eradicating this debt around 2030.

“We’ve been very fortunate that we can pay down our debt fund consistently since this administration has been here for the past eight years,” Archer said. “We are well on our way to seeing the future in regards to our debt—being debt-free.”

Although a footnote in the meeting, East Greenwich also authorized the refund of overpaid property taxes in several blocks before the night ended in high spirits, as Archer added, that with this new road every aspect of the town will “be represented.”

It would be remiss not to add that Archer is a member of the Republican party.