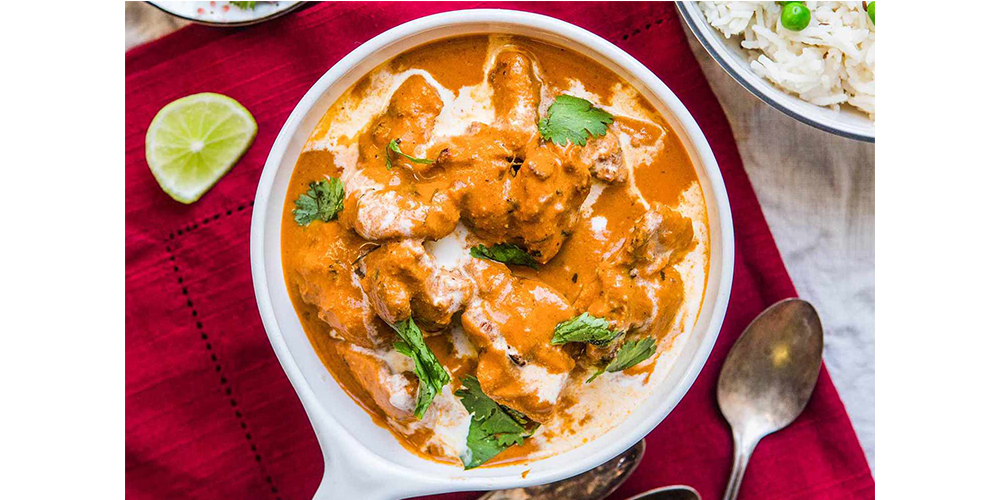 We have so many wonderful restaurants in this immediate area that I thought this would be a great place to introduce them to you, and for others, to find out the secrets to a favorite dish.

This month I’m highlighting Spicy Affair, Indian Cuisine. It is located in downtown Swedesboro in what was once the Swedesboro Trust Bank. You can’t miss the large stately brick building on the corner of Railroad Avenue and Kings Highway.

Spicy Affair first opened their doors in a much smaller location on Woodstown Road but soon became so popular, they had to move to a larger location. They chose the Swedesboro Trust building and renovations began.

And so did COVID. The restaurant opened their new location slowly with take-out orders and outdoor dining but soon developed a reputation for their excellent cuisine. They have been written up in several food magazines.

One of the recipes that the owners Nik and Cindy Minhas would like to share is their recipe for Butter Chicken. For those unfamiliar with Indian cuisine, this is a great “starter” dish.

Butter chicken is a great, ever-evolving, cross-continental dish found in Delhi, London, New York, Perth and most points in between. In its purest form, it is yogurt-and-spice-marinated chicken breast dressed in a velvety red sauce comprising of butter, onions, ginger and tomatoes scented with garam masala, cumin and turmeric, with a cinnamon tang.

It is wildly luxurious and best served with basmati rice.

3 pounds chicken thighs, or chicken breast based on your preference

2 red chiles, like Anaheim, or 1 jalapeño pepper, seeded and diced

Whisk together the yogurt, lemon juice, turmeric, garam masala and cumin in a large bowl. Put the chicken in, and coat with the marinade. Cover, and refrigerate (for up to a day).

In a large pan over medium heat, melt the butter in the oil until it starts to foam. Add the onions, and cook, stirring frequently, until translucent. Add the garlic, ginger and cumin seeds, and cook until the onions start to brown.

Add the cinnamon stick, tomatoes, chilies and salt, and cook until the chilies are soft, about 10 minutes.

Add the chicken and marinade to the pan, and cook for 5 minutes, then add the chicken stock. Bring the mixture to a boil, then lower the heat and simmer, uncovered, for approximately 30 minutes.

Stir in the cream and tomato paste, and simmer until the chicken is cooked through, approximately 10 to 15 minutes.

Cook for an additional 5 minutes and remove from the heat. Garnish with the cilantro leaves.

Thank you, Nik and Cindy Minhas. Be sure to stop in at Spicy Affair to sample some of their other delicious items. They are located at 1427 Kings Highway, Swedesboro. Call 856-214-3828 for information.